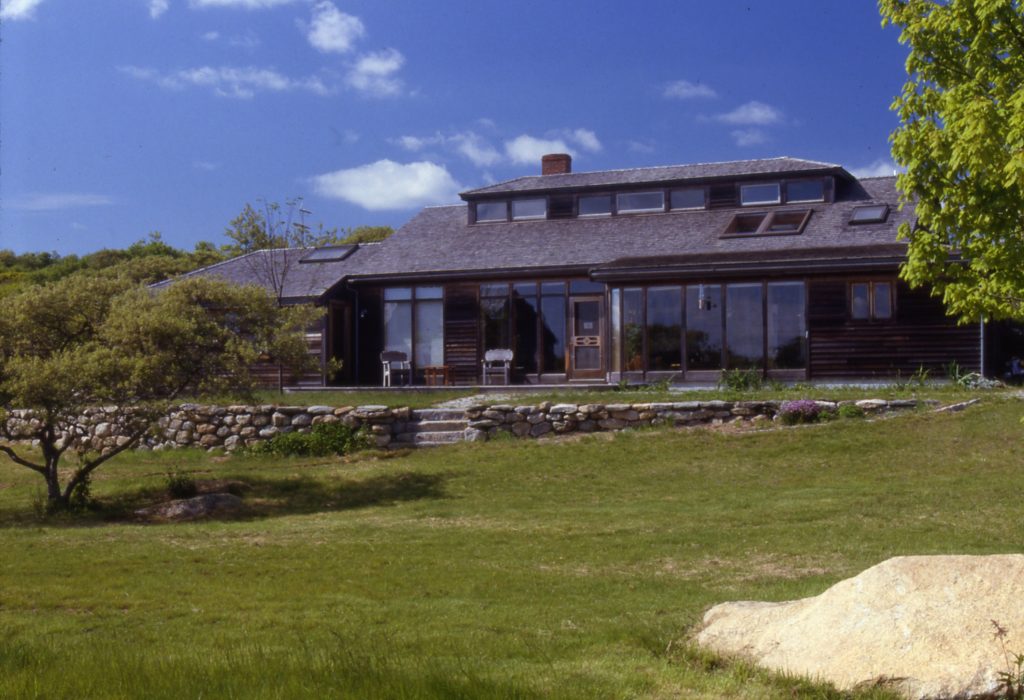 The only time I ever built a physical model of a house was for the Chilmark house my late wife, Chris, our son Pinto, and I designed in 1982. He was 12, and our daughter Sophie, who would be born on the night we moved in (in late 1984), had not yet been imagined. I wonder what became of that foam-core model.

We built that house, lived there until Sophie was 15, and sold it in 1999. In those days, South Mountain’s shop, offices, and my family home were all located on our property adjacent to the Allen Farm. The company was growing, and we needed more space. We couldn’t expand on that site. It was time to move on. We migrated to West Tisbury to develop our current campus and Island Cohousing.

In 2011 I took the South Mountain architects to see the Chilmark house. Some of the younger ones had never seen it. “It’s very dynamic – the levels, the light, the textures,” said Matt Coffey.

The reason for the field trip was that the house was going to be torn down by its owners to make room for a new one. Only 28 years old, it was bulldozed, taken to the landfill and replaced with a high-end contemporary and pool.

It was one of my best buildings. It was hard to see it go, but we had experienced our emotional parting when we sold it 12 years before. Still, it was sad.

After the house was completed in 1984, for a time South Mountain’s work veered off-course. My colleagues and I had been on a design path that combined several threads: a “vernacular modern” style characterized by passive solar, natural daylighting, and dedication to craft and fine materials. But the vernacular and the craft began to take over; modern and solar took a backseat. It was to be a lengthy detour, at least 10 years, before high performance (in terms of energy, daylight, comfort, health, and durability) re-gained prominence in our work.

(Our country was charting a parallel course. Reagan was in office. The solar panels Jimmy Carter had installed on the White House were ridiculed and scrapped. Frivolous and tasteless post-modern design was all the rage – goofy pediments and all).

In 2005, I was working with Ryan Bushey (then a young architect, now our Director of Architecture & Engineering and one of my co-owners), on a zero-energy home. The site and solar opportunities were similar to that of the Chilmark house. I took Ryan to see it. Several aspects of his 2005 design were modeled after my 1983 design, but Ryan took it to another level. 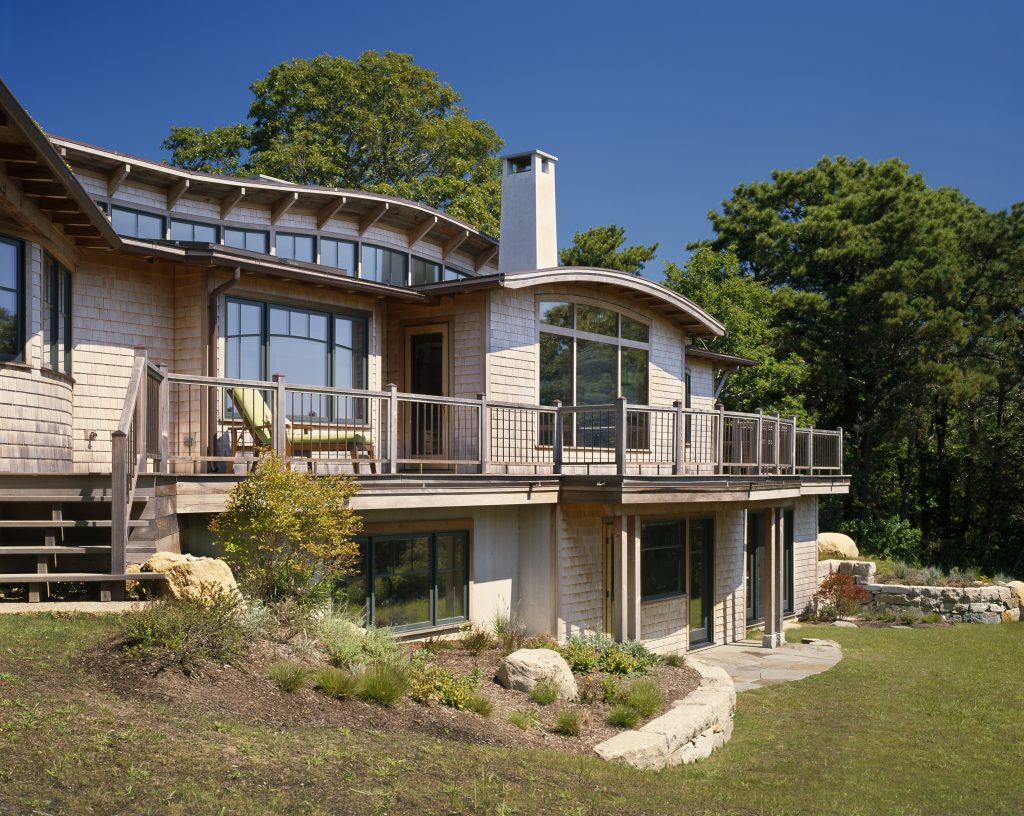 The Chilmark house (where my family lived for 16 years) and another one completed in 1981, several miles away (that has been extensively remodeled in a way that took the soul out of the building) are, I think, the best examples of early SMCo work – both designed and built about 40 years ago.

One’s gone. One is a shadow of its former self. Fortunately, there are other decent examples of our early work, but those two have a special place in my heart (absence really does make the heart grow fonder).

I suppose I could have kept and cared for the Chilmark house. But I didn’t. It was important to make a break. The results of the development of Island Cohousing signified that SMCo was all the way back-on-track. And the Cohousing neighborhood was good place to live. It had its downs and ups. Chris succumbed to cancer in our house there in 2017; shortly after Sophie got married on the pond.

One of the prominent features of our Chilmark house was that it was built into a hillside and stepped down the hill in three levels. The lowest step was only 17”, the height of a chair. This was the dining area. A special round table with a large lazy Susan and a laminated semi-circular wood bench on the upper level provided some of the seating (the rest was chairs on the lower level). Everyone loved that table and space. Kids loved the lazy Susan. Dogs loved it that if someone left food on the table it was right at their height, ripe for poaching. 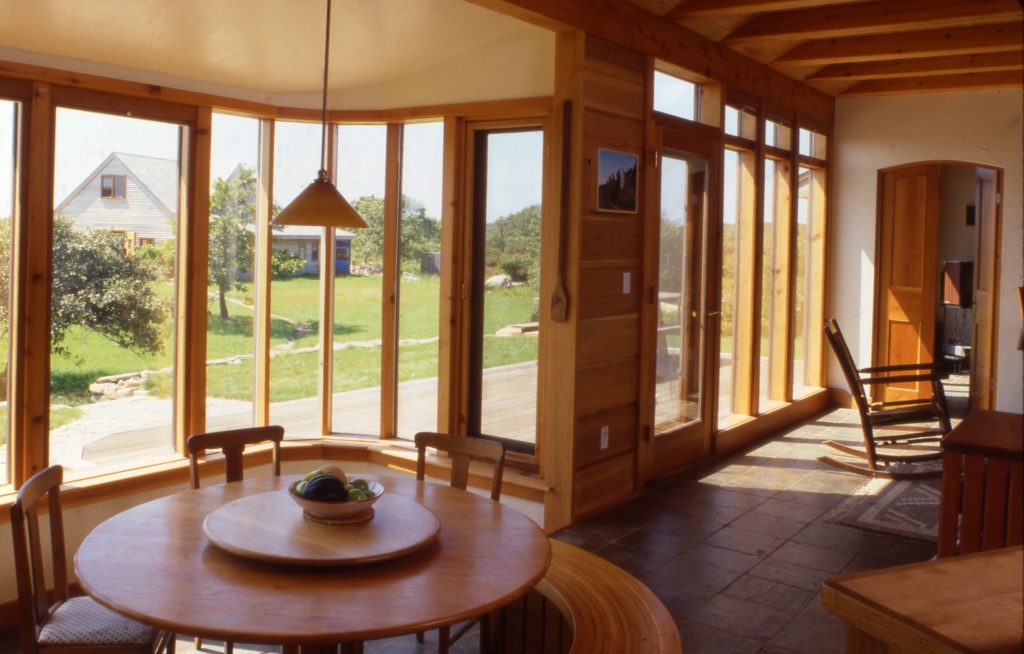 Before the house was torn down, the owner gave that table – lazy Susan and all – to a young neighbor, who grew up playing with Sophie. A few years ago, he passed it on to her. Our Shop Lead, Jim, restored and re-finished it, and replaced the lazy Susan bearings. Now Sophie, her husband John and their three young kids gather round it. Their twins, Bodie and Turner, born just two months ago, will know that table from birth, just as she did. Her three-year-old, Rockland, will probably ride the lazy Susan and tax those bearings just as she did. Maybe we’ll replace them for the third generation.

We find our calling and our path. The journey is complex. Along the way we stray. We find the way again. Things are dismantled and things are saved. Some circle back around.

There’s poetry in that.

P.S. The sweet little horse barn we built for Sophie and her friends on the Chilmark property remains. All is not lost, ever. 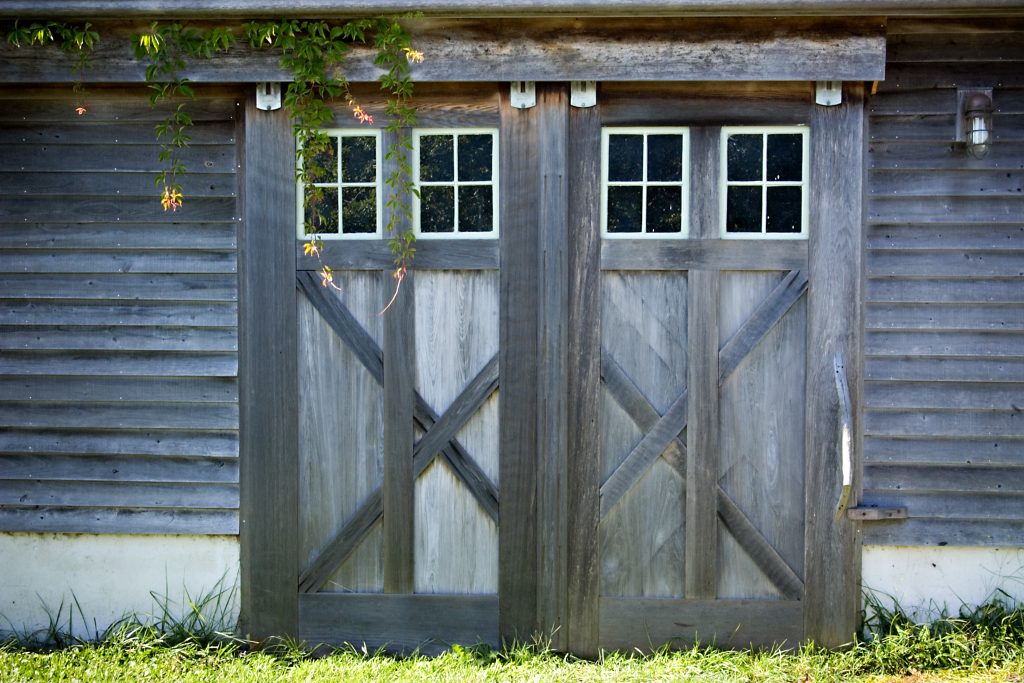