As we steadily approach a Nex Gen Transition that will culminate two years from now, a two way migration is occurring at SMCo. Elders migrate out, and new faces/new talents migrate in. In the last decade, six longtime employee-owners have transitioned to new careers or retired. Collectively, they represent 168 years of employment

The most recent retirement was that of Ken Leuchtenmacher.

We first ran into Ken working up on the hill above the Allen Farm at Rob Kendall’s camp. Must have been around 1988. At the time, he was building solar greenhouses under the Solar Sanctuary moniker.

Ken grew up on a farm in Iowa – a true corn-fed boy – who went on to study at the University of Iowa. When the school shut down in 1969 due to the horrific shootings at Kent State, he migrated to Minneapolis and studied art for a while at the Minneapolis College of Art and Design. Afterward, he worked a couple silk screening jobs: first for a bottling company, then for a sign-making firm that created all the posters for IDS tower, the tallest building in Minnesota. The grandparents of his best childhood friend had a camp on East Chop. Upon visiting in 1974, Ken was smitten. He went back to Iowa, dealt with the way-too-early death of his Dad, returned to the Vineyard, and never left. He worked at the hospital for a while before joining Roger Wey’s construction company. They poured the slab in the second house we ever built, in 1976. (I remember that slab. Can’t say it was the best ever.) Soon after, Ken signed on with Burnham and Magnunson, earning his carpentry chops before starting his own business in the early 80s.

In 1993, we began work on our largest project – by some measure – to date: the Kohlberg House at Swan Neck. By that time, Ken had formed a partnership with Patty Egan and Larry Schubert. We hired all three to help us with the endless carpentry in this highly crafted timber-framed house. Shortly after completion, Ken migrated to SMCo. For many years, he was Billy Dillon’s solid second. Quite the duo – Ken was the quiet, steady, curmudgeonly assistant who always kept his talented and rambunctious leader in line. 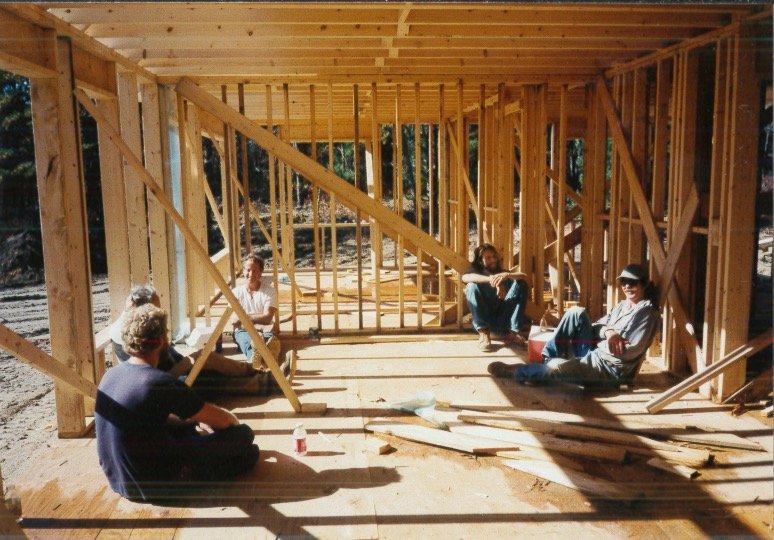 He would work in the shop on rainy days. In 2005, he became an SMCo owner. A year later, after a long shop tour-of-duty building the Marcus stairway, he stayed. And never left until this May. He was a fixture as Jim’s assistant shop lead. A craftsman through and through, and an artist too, he was always a steady force and a mentor to our younger carpenters and woodworkers.

He also became our resident stairway maven. I have no idea how many times he set up in the annex, crafted a complete housed-stringer stairway over the next month or so, disassembled it, took it to the job site, and installed it.

Ken doesn’t suffer fools gladly, he doesn’t tolerate injustice, and he’s never one to pull a punch. He has a way of giving you (and me!) a piece of his mind that always sticks. Because he is generally quiet, his voice, when raised, carries weight. And for Kenny, nothing ever stands in the way of quality, his one-word guiding star. He is a standard-bearer. 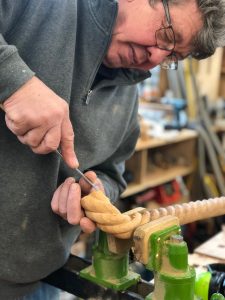 During his time at SMCo, Ken took classes and learned woodturning and wood carving. These began as avocations and became integral parts of his craft. The essence of professional development. He always continued to grow his skills.

Never one to stay idle, Ken was recently recruited by his old partner-in-crime Billy Dillon, and Camp Jabberwocky, to do an extraordinary job.

He transformed a swing pergola (that we built when we did our Jabberwocky renovation in 2018-2019) into a memorial to celebrate campers who have died over the 60 years of Jabberwocky’s storied past. He hand-carved their names – 24 of them – into the re-purposed tree trunks that support the pergola. “When you go to camp [as a kid] , you carve your name on a tree,” Ken said in a Vineyard Gazette article “It’s like they’ve been there and carved it themselves.”

Each day camp caretaker Jack Knower, a former counselor and keeper of institutional knowledge, would tell Ken about the campers whose names he would carve that day. Ken said it was almost a religious experience. “I really feel connected to these people.”

We will always feel deeply connected to you, Ken. You’re an essential part of our history.