We began our recent year-end company meeting by reviewing finances, work completed, work ahead, affordable housing projects in the pipeline, solar sales and installations, and a variety of compelling and not-so-compelling metrics and indicators.

It has been a very good year, as were the two that came before.  A robust trifecta.  One of our younger employees, Ian Gumpel, asked why we’re doing so well.  Great question.  I mumbled a few dis-jointed explanations that didn’t quite add up.  Later I thought more and the next day I wrote a brief addendum to everyone that said in part, about Ian’s question,  “As a friend of ours, Devon Hartman, once said, ‘The key to making a company work is getting all the wood behind one arrow.’  We are making great strides toward doing just that.  Sometimes it doesn’t seem so; the alignment can be obscured by the drama and upheaval of constant change.  But it becomes clear through the lens of our triple bottom line  performance.”

Three employees gave three minute soapbox talks (a recent tradition at our company meetings).  Energy Manager Rob Meyers explained what happens once sunlight hits a solar panel (the physics of how electrical energy is made and where the energy travels to and how).

With a lot of heart and soul (and laughs), carpenter Primo Lombardi talked about “what it means to be a carpenter” (he held up a piece of rigid foam insulation, turned to me, and wondered if I could find him a piece of wood from the shop, because he “can’t seem to find one on the jobsite.”  The carpenters are not enamored of the thick rigid foam with which we often wrap buildings these days). 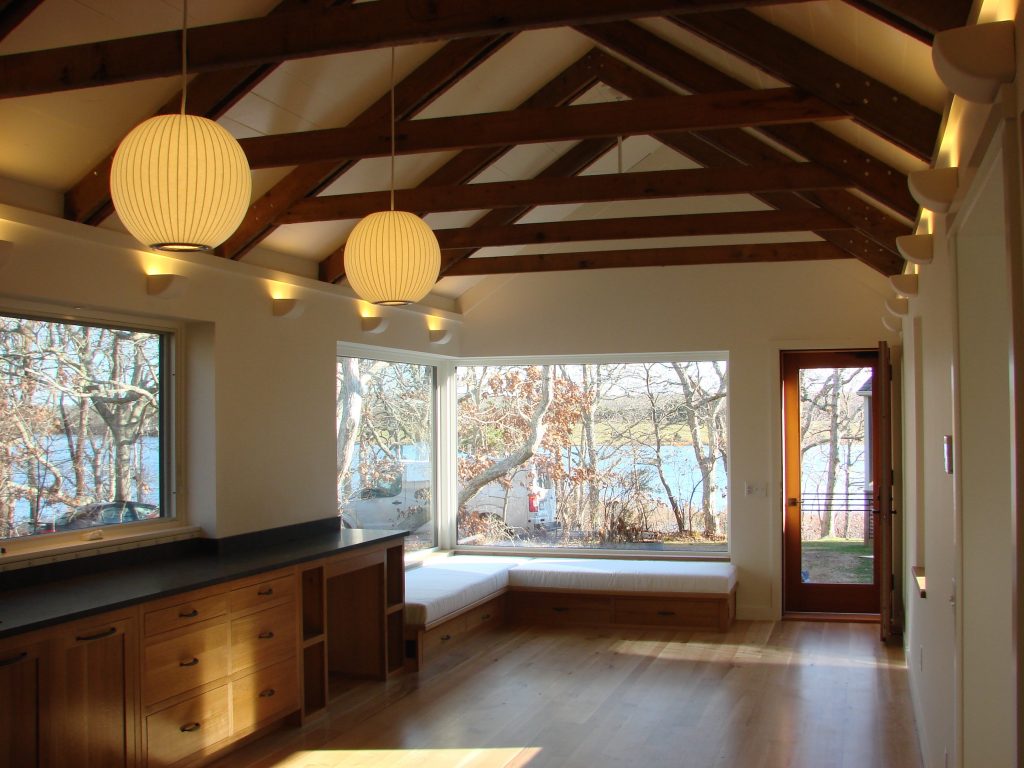 He ended with a note from the clients:

“The house is absolutely perfect. I was in love the minute I walked in the door. It’s beautiful. The view! The windows! The light! The beams! The floor! The doors! Thank you for all the thought & work you put into it and for helping us make decisions and, well, for everything. We couldn’t be happier with the results.  The people on the crew were great.  It’s always a treat to work with South Mountain. 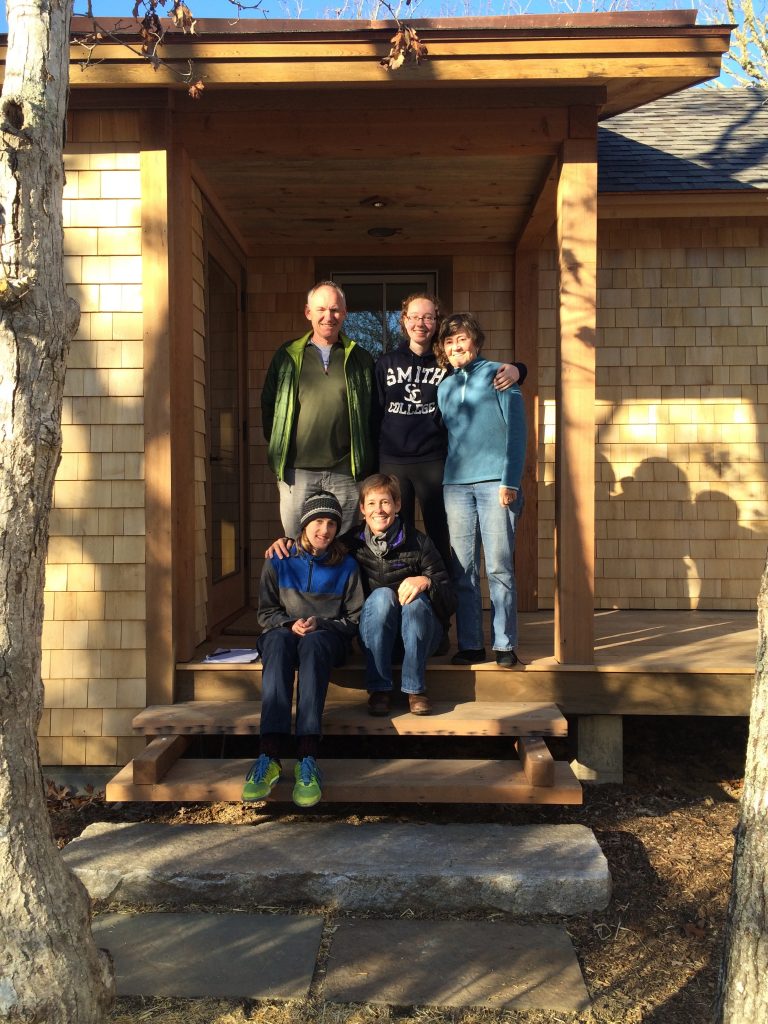 Phil and Deirdre have had particularly interesting career trajectories at SMCo.  When Phil came he was an ace woodworker who had run his own shop.  But at SMCo he tired of woodworking after a few year; he was looking for something different.  We tried him at a few positions – production manager, product sales, etc. Nothing was quite working or truly satisfying. Then, seven or eight years ago, when our solar business started to take off, Phil became the lead installer.  He loved it.  His work had meaning and he loved the constant new challenges.  He still does.  After years of struggle to find his right place in this company, Phil made himself into the best damn solar installation guy there could possibly be.  He trains the installers and interns.  He even instructs the electricians and electrical inspectors!  He knows his business.  He’s dedicated to what he does and passionate about it.  He sets the highest standard for quality.  Nobody does it better.  He found his place.

Along those lines, Deirdre’s story is a classic.   It’s not short, so I’ll tell it in a future post.  These are tales of work migration, about people who move from one region of the company to another until they find their perfect habitat. It shows that it’s possible, even in a small business like ours, to provide diverse opportunity.

At the end of the meeting, before the Appreciations with which we end all meetings (we learned that from our friends at Zingerman’s in Ann Arbor), we did another recent ritual, the passing of The Fork.

Remember I mentioned that Phil was quite a woodworker?  His skills remain intact.  One day last year he walked into my office with a wooden fork.  Not just any wooden fork.  This custom made wooden fork is 4’ long – more sculpture than utensil.

In honor of Billy’s inspiration Phil chose to make him the first fork recipient.  He did.  And it has been passed on several times since.

At this meeting, it was passed from Curtis Friedman to Pete Ives, who is the last remaining SMCoer from the way early days, besides me.  Pete will soon to start his 39th year here.  He has been a wonderful co-owner, friend, and partner in crime, and I love him dearly!  Eat well, Pete.  You deserve it. Enjoy the holidays. 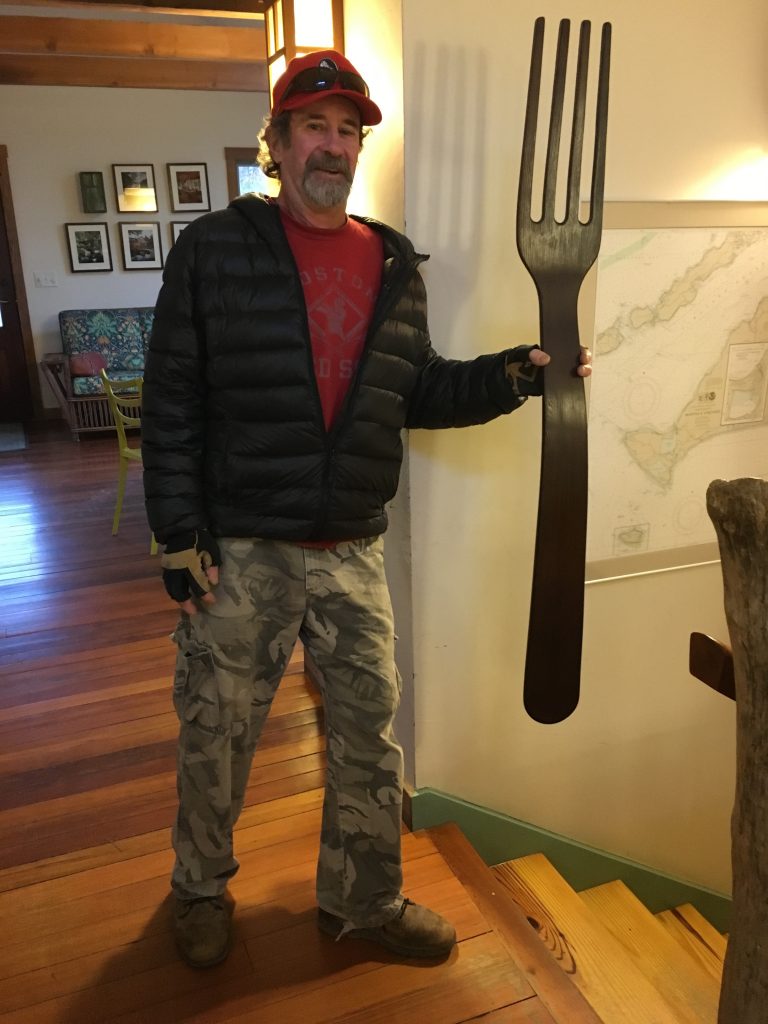 And Happy Holidays to all of you from all of us at SMCo. We wish you a great year in 2016.  Let’s hope it’s the year during which the parade of presidential wack jobs – who have the nerve to stand before us at the Republican debates – follow each other like lemmings onto an offshore oil platform or deep into a coal mine.  And stay there, safely stowed, while Bernie Sanders helps us all change America!