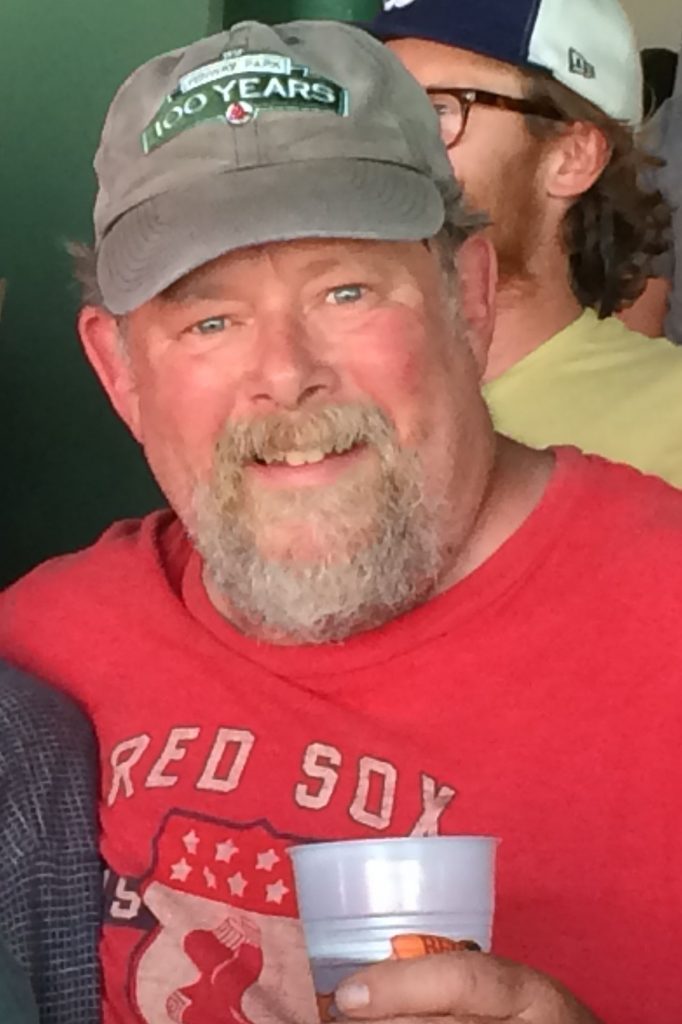 Pete D’Angelo came to work at SMCo in 1987.  Five years later, he became an owner.  For the past decade or so, he has had the complex job of planning and managing all of our service & renovation work.  In any given year we do repair work and small improvements/additions to roughly 50 different houses that we previously built or renovated.  It’s an important service. Co-owner Peg McKenzie manages the office end.  Pete manages the field.  Two carpenters and a collection of trade partners support their efforts.

For 18 years he has also managed our indescribable annual Chappy golf tournaments.

When Pete came in recently and told me he had decided to retire, my heart sank.  He’d be hard to do without.  All that institutional knowledge, all that can-do problem-solving, all that relentless dedication to improvement . . .  and those pithy, irreverent hilarious e-mails and comments – just gone?  Just like that?  Are you kidding?

Yes, just kidding.  He’s not retiring.  But it was close.  It’s hard to express how pleased I am that he’s staying on half time, continuing to do all the most important stuff that he does, continuing to care for all the houses and clients we’ve put heart and soul into and continuing to add his always-entertaining offbeat commentary.

For many years, during discussions of upcoming company events, Pete said that we should all go to a Red Sox game together.  Here’s one note he sent when we asked people in the company for suggestions for company events:  “What the fuck? Trip to Fenway. We rent a bus. Stop at Jordan’s and load up on furniture cause it’s gonna be free, stay too long at the Cask and Flagon, catch a game, tattoos on the way home. Now that’s an event!!” Nobody ever listens to his pleas, but this time, as we contemplated his upcoming end of ownership and shift to half time, it seemed like a good time to listen.

On June 18th 55 employees, spouses, and others piled on to a rented bus in Woods Hole and headed for Fenway.  Many had never been there.  If you have, there’s no need to tell you it’s a singular American experience. 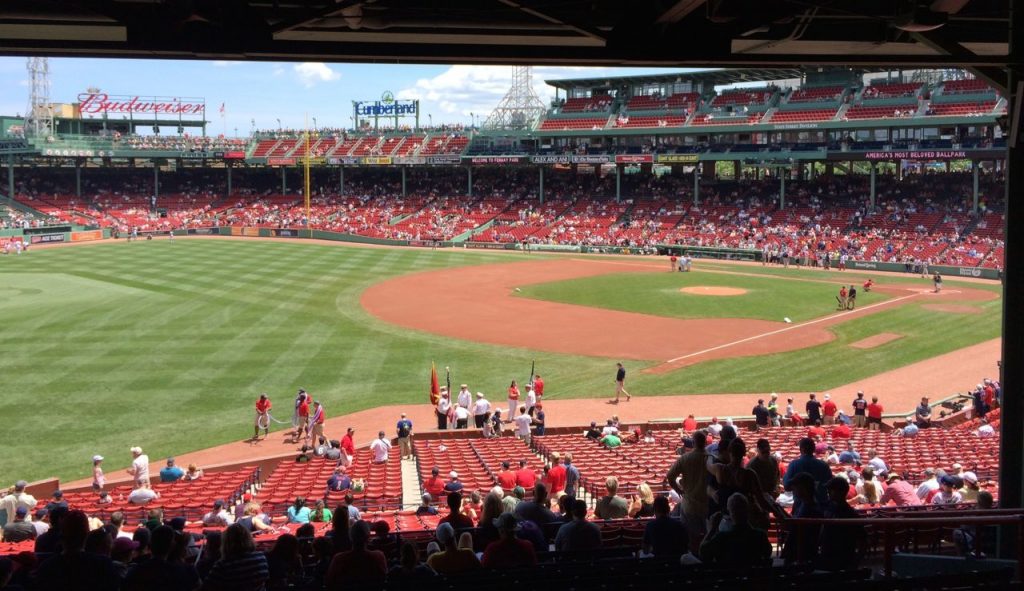 It was a great day and a terrible game.  For those who always thought baseball is boring, this game provided confirmation.  Nearly. 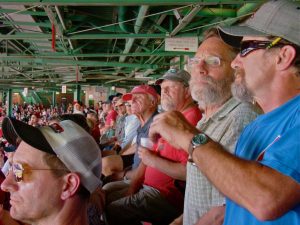 It was zero zero through nine innings, and it wasn’t a tense, flawless zero zero, it was a dull and sloppy zero zero.  On to extra innings.  In the top of the 10th Minnesota’s Chris Parmalee hit a home run off usually unbeatable Sox closer Koji Uehara.  Twins up 1-0.  In the bottom of the 10th, David Ortiz tied it up with a booming home run. 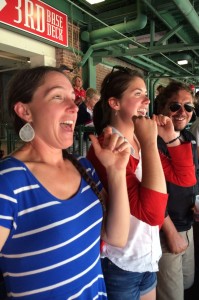 The Fenway faithful woke up, stood up, and watched Mike Napoli follow Ortiz with a walk-off home run.  Back to back home runs to victory.  Fenway went wild, and I mean wild, as only Fenway can.

It was a great day and a great game. A perfect tribute to a wonderful guy and loyal fan.

So much for the Sox.  Back to work.

Pete does a fine job communicating with clients.  It’s not the usual, it’s sometimes a bit edgy, but he is universally loved by our clients.  You have got to have a sense of humor to deal with him, but wouldn’t you agree that even the most seemingly-humorless people have a deep reservoir of laughs in them waiting to be set free by a truly funny person?

Here are a few snippets from some of his e-mail communications with clients:

I stopped by your house and managed to latch the offending windows with my vice-like thumbs, strengthened thru years of practice of the sacred Bavarian ritual known as opening a bottle. Luckily, seeing as we are at the height of Oktoberfest my thumbs are conditioned to peak performance.  Norton will be stopping by before you get back to take care of some touch ups and Indigo will have finished the patio. All done – you can stop worrying.

After examining your leak I did what any self-respecting fly-by-night contractor would do. Blamed somebody else. The shingler tore the sidewall apart.  Ugly but nothing really out of place. As they were shingling up, one of them put their hand up onto the windowsill above. Bingo. Both sills are rotted out. Once it is soaked, water runs right thru down into the wall below. The bottom edge of the screen makes a little damn insuring the water has an opportunity to build up and run in and wreak havoc. We have it temporarily patched and will be back shortly for a very expensive permanent fix.

Got your message.  I can make it tomorrow any time but three to four or Friday after five, or anytime on the weekend. I’ll be gone the rest of the week. I’m whisking my daughter away to college in St Paul, Minnesota, where at the state fair they carve statues of large farm animals out of butter and then deep-fry them.

Pete’s job is hard, involving a tremendous amount of coordination with clients, employees, and trade partners.  He has a gruff exterior, but he’s actually incredibly patient.  Sometimes, however, he goes over the falls:

It’s after 4 o’clock and he has stood me up again. No flowers, no chocolates and no motherfuckin’ cabinets. You’d think I’d learned my lesson by now. This is the fourth time. You’d think he’d call or something. An email. A text! Is that too much? A text. Who am I kidding? We all know how this ends. The bastard. Maybe he’ll come tomorrow. Then again so might the Easter bunny.

Pete is democratic with his insults and irreverence – everyone is fair game.  Here’s a note he wrote to Marc Rosenbaum, our resident systems engineer:

I’m going to the ACI conference in tropical Saratoga. My plan is to jack the temp in my room up to 90 and walk around the conference in swim trunks, Hawaiian shirt, flip flops, coffee cup with one of those little parasols. Now that’s comfort, huh?  John thought I should consult with you on which workshops to attend rather than my usual throwing a dart at the program, though I think that’s liable to yield better results than talking to you.

And here’s one he wrote after seeing a picture of our good pal and longtime co-owner Pete Ives in the hospital after double knee replacements:

The man in the picture escaped from an R. Crumb comic strip circa 1968 titled “Miss Bitchin’ “. He has been on the lam since Richard Millhouse Nixon’s daughter picked him out of a line-up in the basement of the White House. If you see this man do not approach him unless you have an 8-track tape deck in a 1963 Ford Econoline. If you do just open the door, he’ll jump right in.

But I think he saves some of the best for me.  Our relationship has been characterized over the years by full tilt blunt exchange both ways.  Since this is about Pete, and not me, I’ll share only his side of a few of these exchanges.  Most of it I can’t even print, not because it’s embarrassing but because it’s too vile and crass for a refined publication like this one.  But here are a few choice ones:

When I asked him if he could make a meeting the next day, (not long after a meeting where I had been critical of the goings-on at a particular job):

Yeah yeah got your message. Working on multiple life crises right now. Will call in the morning to confirm.  Planning any more character assassination for me and my crew at the meeting?  If so I’d prefer not to attend.

When I advised him about a certain way to handle a situation:

I’m not sure I agree with you. It’s a good situation, though. If you’re right, that’s to be expected, ‘cause you’re the expert on this one (can’t believe I’m saying that). If I’m right, I get to lord it over you forever.

After I suggested that we take on some weatherization work for an agency that was having a hard time getting it done:

It’s not just awful work (similar to a root canal or a botched vasectomy).  It’s dirty, unhealthy, and you have to share small confined spaces with rather large rodents. While you may like the idea of doing something positive for the community what about us? I know it’s my usual blah blah blah but if you want to get a good idea of what the work is like meet me in Williams’ crawl space.

And the finale to a particularly testy exchange between us:

Not trying to piss you off or stir up shit. Just the opposite. I’ve got a full plate and I’d rather take this off. I just want to keep my head down and keep working. And if I pissed you off, that’s just a bonus.

Pete has had many ways of communicating about the aches and pains and injuries that have accumulated over decades of hard work.  Here’s one:

Sometimes Pete is actually positive (in a way).  When a new employee helped out on his crew one day he wrote:

Ian. He’s a keeper. His youthful exuberance and unbridled positive energy infects most everyone.  (We know those who can’t be infected). It’s great having him around. I’ll trade you Boboh (a close friend of his and one of our long-time carpenters who is retiring this year) the old van, the new van, a broken bat and a player to be named later to keep him around.

He can be sentimental too.  After he ranted at me for scheduling a meeting on a Friday afternoon he wrote:

Forgive my tirade re Friday meeting.  I have fond memories of Friday afternoons at the old South Mountain. Sophie on the zip line, the rhythmic swish-thump of Pinto on the half-pipe, beer, volleyball, you in the hammock nursing JD on ice . . . . I looked forward to this all week.

I’d rather not sully these memories by replacing them with a long tedious Friday afternoon meeting.

When we put out a request to our owners about what ownership means to them, for our website, Pete wrote:

On a cold winter day, I turned to the loader operator and said “we’re going to cut slots in the end of the building, slide these steel beams in, crib them up to the second floor frame, cut away the first floor walls, lower the house into the back parking lot, put wheels under it, fill in the foundation and then tow the house up the road to an affordable housing project.”  Snow and rain dripped off his beard onto his coveralls. He looked at me and eloquently stated, “one would not think that possible.”   House moving, large solar projects, zero energy affordable housing, the chance to make that which one would not think possible into standard fare – that’s what gets me up and crawling out to the truck lo these 25 years.

These 25 years would have been very different without him.  He’s a keeper, and a unique one at that.  I’m mighty glad he’s still here (can’t believe I’m saying that, Pete!).