Our youngest project lead and Owner, Aaron Beck, is a very good carpenter (and manager too).  He carves duck decoys with great skill.  But his passion – these days – is metal.  Aaron loves blacksmithing.  Last year he spent a week in Mississippi living in a backwoods trailer and learning from an accomplished blacksmith there.

This spring he came to us and said he had a great opportunity:  a well-known blacksmith in Montana, Jeffrey Funk, had agreed to take him on for a three month internship.  He asked if he could take a sabbatical.  We said yes.   He needed to finish a house he was working on by the end of June; then he could take off for three months.

Part of Aaron’s interest – and part of our interest in his interest – is the idea of setting up a blacksmith shop at SMCo to complement our woodwork and enhance our architecture.  Might this happen?  We don’t know, but it’s a topic of some consideration these days.

Aaron returned from his Montana experience in October.  Here is, in part, what he had to say:

So he continued by describing the arc of the journey:

“I left later than I had hoped due to some delays finishing up Glenn Hearn’s house.   Jeffrey Funk was understanding but said that I should arrive on July 5th.  This caused me to dial in my travel times but still allowed me some freedom to explore.

As I was leaving Billy [Dillon, another SMCo project lead and Owner] passed on the name and number of a carpenter in Iowa who needed some help with an eyebrow dormer.  After chatting on the phone I agreed to take a minor detour and help for three days.

Elijah Cornell turned out to be a year or two older than I, and a very capable framer.  It was a pleasure – both working with him and crew, and getting to know him and his family during my stay.

The eyebrow proved to be about as complicated as could be as it needed to match the existing fascia and soffit on the front and also plane with some scissor pitched hip trusses on the inside ceiling as well as fit below the hips on the main roof which it sprang from.  But I walked Elijah through the lofting process using the German textbook as our guide, and we got it done.

After it was done I said goodbye, wished them luck, and left to race on to Montana.  I ended up driving late into the night and all day on the 4th to arrive on the morning of the 5th.

Jeffrey and his wife Betsey were very gracious hosts.  Throughout the summer they endeavored to include me in their lives – sharing their hobbies, garden, shop and home with me.  I spent the weekend getting acclimated, and even managed a hike in Glacier. 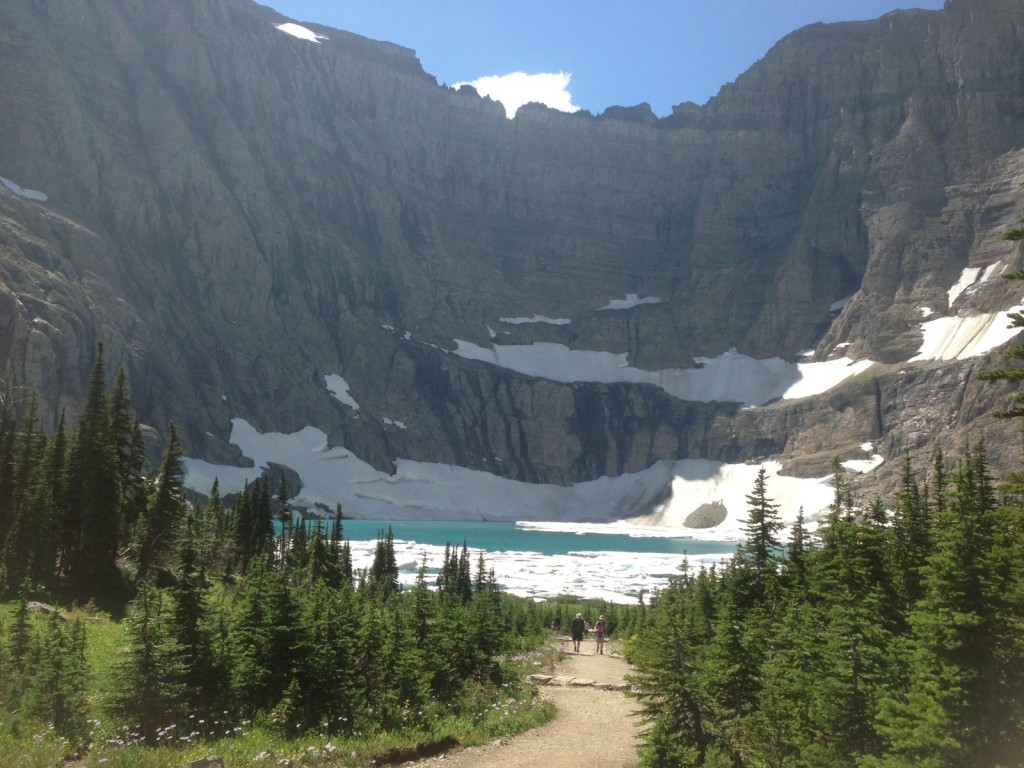 Work at the shop  began at 8 and generally knocked off around 5:30.  It made for a long day.

We worked on several projects throughout the course of the summer, not really completing any one. 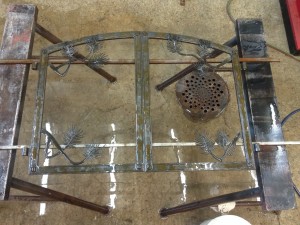 From a fire screen to a grille to a fancy stainless fence – I helped as needed.  Much of the work was not “hot work” (forge) but some was and I learned a lot no matter what I was up to.  In addition to the basic skills of blacksmithing I got a full exposure to Jeffrey’s work philosophy and his inventive nature.  He has made almost all of the tools and machines in the Jeffrey Funk shop.  This is an impressive array of equipment for the manipulation of metal.  From power hammers to forging presses, cranes to sawhorses, almost everything was made from scratch and most from found or scavenged items. 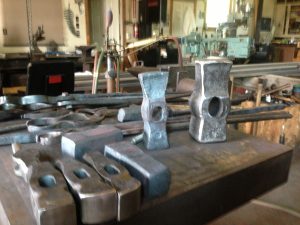 The back barn on the property is known as the “hardware store” and if you could find it (amongst the piles of drying wheat and bicycle powered farm equipment) it was surely there, whatever was needed, saving a trip to town and unknown expense.  Most blacksmiths I’ve met seem to be hoarders by nature but Jeffrey had them all beat with the control and creativity with which he marshaled his finds.  In sum, it was pretty impressive (if occasionally intimidating).

Jeffrey’s style of work is pure micro focus.  One of the shop mantras was “precise at the beginning, loose at the end” and he had us forging to the 1/64”.  Not only does metal demand a generally greater level of precision than wood, so too did Jeffrey’s overall vision.

Northwestern Montana is a truly beautiful environment in which to spend a summer.  The weather is close to perfect and the views are pretty sweet as well.  I was living in a small town right on the shore of Flathead Lake so a swim in the clear water became an end of the day routine.  There was excellent hiking nearby and with a little effort I could make my way to Glacier National Park to play.  Despite my best intentions to fly fish and mountain bike, I spent much of my free time hiking.

Bigfork was not far from the west coast and one weekend I took a trip to Seattle to visit friends.  I got a chance to look up Jake Jacob, an old friend of John’s who I had worked for on a treehouse in Pennsylvania some years ago, on my last sabbatical experience.  He lives in Port Townsend Washington in a beautiful off-the-grid house which looks very “South Mountainy”.  It was neat to get away from Montana, meet a bunch of west coast artist blacksmiths and see the ocean at least once over the summer.

Another weekend I headed about the same distance east to Bozeman and spent a day poking around Big Timberworks with another old friend of John’s,  Merle Adams.  Merle was an interesting guy, never short on creative ideas and a total hoot to tour around with.  BT was of particular interest because they have incorporated an architectural metal shop into their business.  I was eager to see some of their work and get ideas for how a design build firm might incorporate metal.  Merle showed me the shop and the various metal ideas they had managed to incorporate into their buildings – from sinks made of plowshares to metal handrails and many things in between.  Much of the metal was salvaged and re-purposed and much use was made of artistic patinas.  It was pretty neat to see all that, some of which was presented in a “showroom” type building where they meet with clients.

I find forged iron to be intrinsically beautiful.  It is rewarding to work and rewarding to behold once worked.  It is an honest material that doesn’t relent to its final form readily; yet once wrought, its clean lines and rigid form can highlight the warmth of well-executed woodwork like nothing else.  I truly feel that there is a natural place for metal alongside our beautiful salvaged wood.  It is a capability we should present as part of our comprehensive design/build ethic.

I remain on the quest for mastery of this new medium. 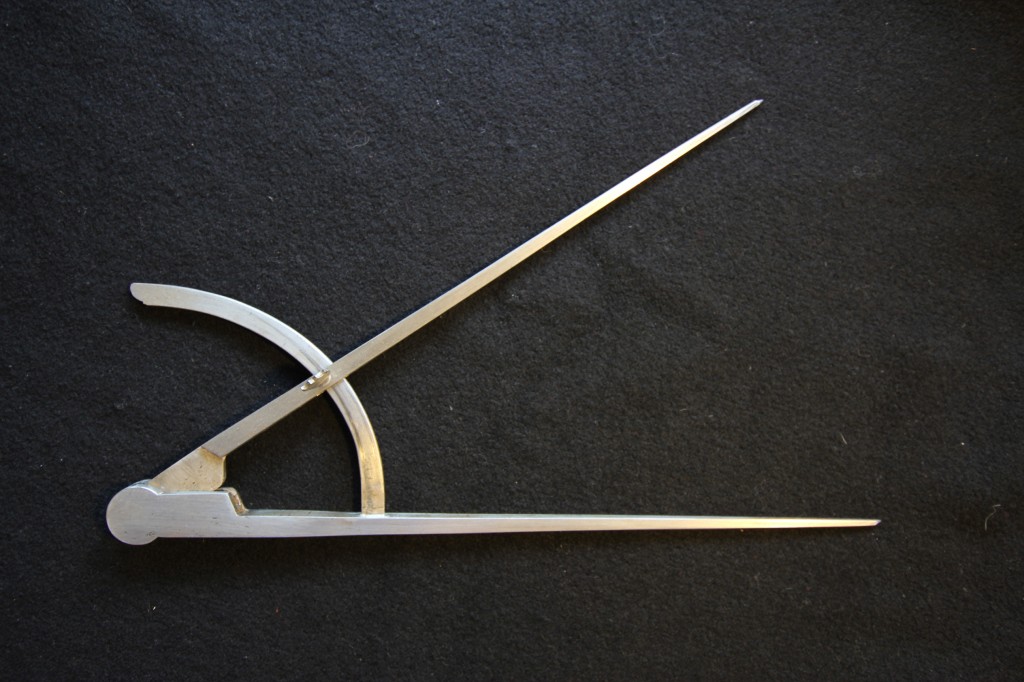