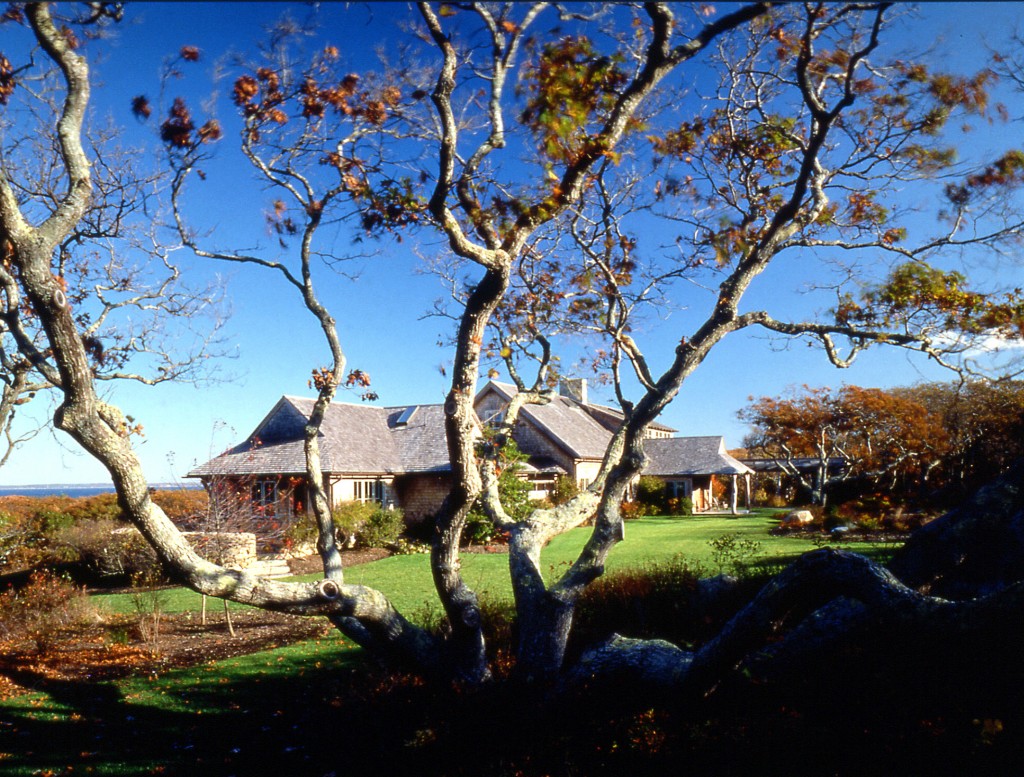 It began in 1996 when Roy and Diana came to us after purchasing an 80 acre parcel in Chilmark that stretched from North Road to the Vineyard Sound.  There was an old farmstead near the road consisting of a pre-revolutionary cape, a garage, and a cottage built in the 1930’s.  It was a mile drive down the twisting dirt road to the Vineyard Sound, where there is a lovely cove, a sandy beach, and a small tucked-away camp with an outhouse and a pitcher pump.

Our clients wanted a single house to accommodate their large family in the immediate future and a master plan to make houses for their four children over time.

The property is long and narrow.  The road ran along the edge, next to an adjoining development.  Except for the original farmstead near the road and the beach area, the property was overgrown and inaccessible.  As we began to investigate, we discovered that it is far more dramatic than we initially thought:  there is a series of deep ravines and some wonderful high spots with potential for wonderful views across the Vineyard Sound to the Elizabeth Islands.

During the next several years we worked closely with landscape designer Sanford Evans.  We explored, we mapped, we envisioned.

“At present the entrance is unappealing.  We experience a long monochromatic piece of land – you enter, drive up the hill and down the hill on the edge of the property until you reach the beach.  We propose to take you through a whole different part of the property, and to create a series of events that will make the land unfold like chapters in a book.  The new road will involve complex construction as the land is quite steep, but we believe it is the key element to making this property fulfill its promise.

We also expect to alter the property in such a way that best allows for future development of three additional homes and optimizes the experience of the wonderful natural features that are grouped in and around the prime building site – the wetland, the great rocks, and, most of all, the unique and remarkably shaped trees.

We hope to achieve this in a way that feels like nothing ever happened, but at the same time transforms the property.  If we get the patterns right, and the go ahead from you, we’ll be able to do it, because what we’re talking about is, quite simply, developing a natural expression of what’s already there.”

Roy and Diana got it.  And that’s what we did.

Along with the new road, we designed and built a clustered complex of buildings – a main house, a subsidiary house (called the Trail House), and a stone garage.

In many ways this was the most complex and refined design and construction project we had done.  It is characterized by materials and special craft throughout.  We built much of the furniture and provided all the furnishings – it was Deirdre’s first big interiors job.  Billy was the construction project lead, and he never left:  to this day he manages the property and lives there with his wife Amy. 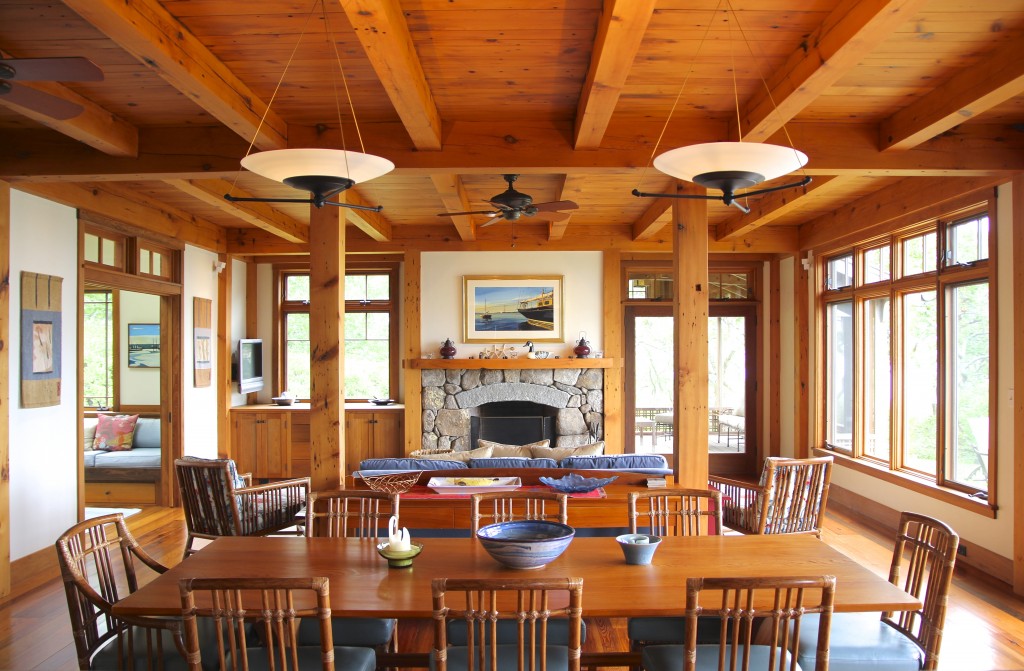 We also master planned the additional house sites and began a series of additional projects.

In 2002 we agreed to design another house, on another part of the property, which became known as the Hill House.  It was completed in 2004.

In 2008 we restored the beach cottage, which, after decades of pounding by sun and rain, had become a bit dilapidated.

In the fall of 2011 we began a deep energy retrofit of the 1930s cottage where Billy and Amy live. 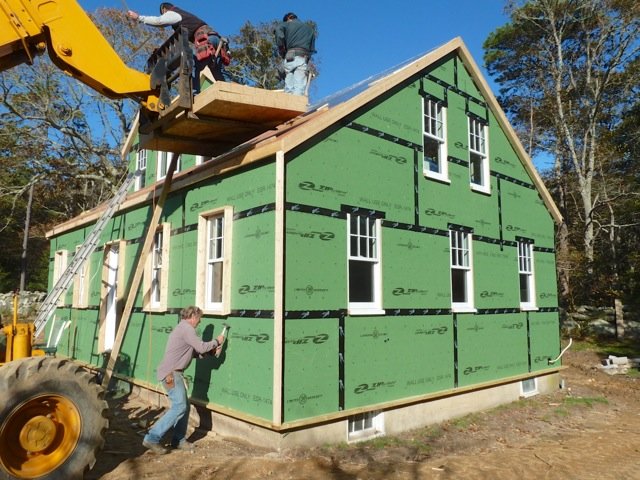 At the same time we began a conversion to electricity for all energy use on the property, and we built a large ground-mounted solar array designed to make the entire property a net energy producer.  The 65 kilowatt solar array has additional capacity for future expansion, and it has produced beyond our expectations.

Then, this year, the renovation of and addition to the Trail House.

This addition to one of the original houses allowed us to re-live the original construction, and find creative ways to match, enhance, and update the sensibility and design of the details, spaces and materials.

We have now been working steadily on this property for 17 years, gradually achieving the goals of the original master plan.

A story from the original project illustrates the nature of the collaboration.

Roy and Diana originally wanted a single large house to accommodate the large family. Because of the presence of some beautiful trees on the site that we didn’t want to lose, we proposed two buildings connected by a roofed breezeway.  When it came time to connect the buildings with the breezeway, it became clear that our design wasn’t right – it was going to be intrusive, it was going to upset the balance and harmony that we had carefully preserved on the site.  So the design team looked at alternative configurations for the covered walkway. Finally one of our designers, Derrill, had the nerve to say, “It’s clear what the right design is – no roof at all.”

“Of course,” was everyone’s immediate response, “that’s the solution.”  Design is sometimes like looking for needles in a haystack, and Derrill was looking for all the needles.

It fell to me to ‘sell’ the idea to our clients, who were very committed to the roof.  I remembered a place that impressed me.  A friend and I were visiting the Japanese woodworker, George Nakashima, at his studio in Bucks County PA about ten years before.  Nakashima took us for a tour of his shops.  There were four small buildings separated by white gravel paths and Japanese gardens.  It was pouring rain that day.

At each building there was a covered doorway with a bin of umbrellas.  As we walked from building to building we’d grab an umbrella, carry it with us, and deposit it outside the next building.

I met with Roy and Diana to discuss.  I told them the Nakashima story and concluded by saying, “So that’s our design solution: you carry your roof with you each trip, if needed, and at all other times you walk under the trees and the stars.”

Once again, they got it, and immediately agreed, and suggested that the umbrella stands should be prominent and beautiful.

Over the years we have watched the grandchildren grow up.  The little tykes from way-back-when are graduating from college now.  We treasure the relationship that has developed with this family.  They love and care for the property, and so do we.  We look forward to seeing what the next generation will do as they become the stewards of this exraordinary place. 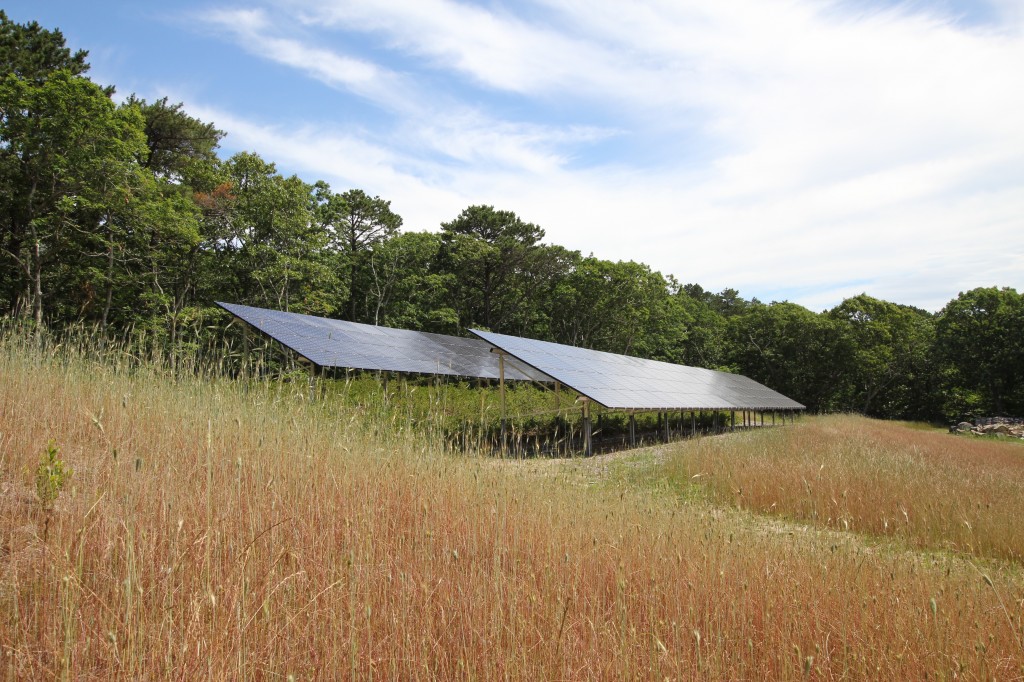