On July 31, the last day of this summer’s legislative session, Massachusetts became the 11th state in the country – along with California, New York, South Carolina, Louisiana, and 6 others – to pass legislation enabling businesses to register as a new type of corporate entity:  Benefit Corporations, or B-Corps.  Benefit Corporations are companies which consider the public good – factors such as environmental sustainability and community benefit – in their corporate decisions rather than financial return only.

According to the Boston Globe, “To rein in the excesses of capitalism without losing the dynamism that makes it hum, a variety of thinkers have begun looking for ways to re-imagine the corporation itself, restructuring it to encourage businesses to pursue not only profit, but also positive social impact. One of those innovations will hit Massachusetts December 1st, when companies here will be able to register as a new entity called a ‘benefit corporation.’ ”

Last Monday, my colleagues Deirdre Bohan, Jim Vercruysse and I joined State Senator Brian Joyce and other officials in the Great Hall of the State House in Boston to celebrate this new designation. 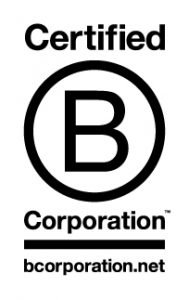 Three days earlier, SMCo had formally registered with the Secretary of State as one of the first Benefit Corporations in Massachusetts (thanks to the efforts of Jessica Manganello and New Leaf Legal, who quickly and efficiently did the necessary legal work for us).

The new law springs from a five-year effort by the B Lab, a non-profit group that certifies companies as “B Corporations” based on a variety of factors including corporate accountability and transparency, treatment of workers, community practices and environmental practices. SMCo was awarded B Corp certification in 2008, and 650 other companies have been certified to date in the U.S. and 14 other countries.  Thousands of others are currently engaged in the process.

B Lab aspires to complete three initiatives:  to screen and certify companies who comply with or exceed certain criteria of social responsibility; to influence public policy to give triple bottom line (people, planet, profits) practices legal status; and to drive capital toward certified B Corps.  The first two programs are well under way.  B-Lab founders Jay Coen-Gilbert, Bart Houlihan, and Andrew Kassoy, and their staff (which now numbers 30) have done a remarkable job in a few short years, creating a robust and apparently durable movement.  Staff members Heather Van Dusen and Holly Ensign-Barstow organized the Boston event.  Kassoy joined them and said, “This is a way to re-define business so that those of us who are in business are trying not only to be the best businesses in the world but the best businesses for the world. “

Maryland and Vermont were the first states to create legal benefit corporations, in 2010. Since Massachusetts became the 11th, Pennsylvania and Illinois have become the 12th and 13th.  D.C. is expected to vote favorably by the end of this year and 16 other states have legislative initiatives under way.  Many of the votes have been unanimous; all have been bi-partisan (imagine that!).

Until now, we have had no real standards to differentiate good work from good marketing.  B-Lab provides exactly that.  A recent article in the Harvard Business Review  likened the B-Corp designation to LEED Certification among developers and the Fair Trade designation among product suppliers.

Most importantly, this new standard extends the purpose of corporations beyond maximizing value for owners and shareholders (as existing statutes require) to combining the pursuit of profit with social purposes.  It provides new latitude for corporate entities, especially public corporations.

As the Globe said, “The idea of a benefit corporation is to weave some social responsibility into the DNA of the company itself through its charter.”   It allows companies to avoid lawsuits from shareholders if the company, for example, does a pro-bono project to benefit its community rather than distributing money as dividends.

The legislation varies slightly from state to state.  In Massachusetts each Benefit Corporation must have a Benefit Director (who can be a Board member but is not an employee or an owner of more than 5% of the company) who files an annual report, and each company must be certified by an independent third party (which, in our case at least, is B-Lab).

State Sen. Brian Joyce, the Milton Democrat who sponsored the legislation, said the law will allow for “doing well while at the same time doing right by the environment and the community in which the company resides.”

Several of the company owners at the State House said the designation codified what they had already been doing.  For SMCo, it’s like gravity – the B Corp designation fits so closely with our mission that it is an obvious step to take.  People, planet and profits all comprise our bottom line and this is a way to formalize it and make our corporate purposes align legally with our mission.

B-Corp designation also ensures that when a business is sold, new owners are more likely to continue socially responsible practices.  Patagonia founder Yvon Chouinard said last January when his company became the first Benefit Corporation in California “Patagonia is trying to build a company to last 100 years.  Benefit Corporation legislation creates the legal framework to enable impact-driven companies like Patagonia to stay impact-driven through succession, capital raises, and even changes in ownership, by institutionalizing the values, culture, processes, and high standards put in place by founding entrepreneurs.”

As Benefit Corporation legislation and the B-Corp idea gain traction around the nation and the world it indicates that a restorative, generative economy – one that we all know we need – is coming to life in the wake of the troubling times of the recent past.  We are thrilled that the MA legislature and B-Lab have teamed up to make this opportunity available for Massachusetts businesses.  We hope that we can live up to – and be a shining example of – the principles of the Benefit Corporation for decades, and for generations.  And we hope many will join us.

This is the future of business, an important part of a prosperous tomorrow. It’s a step toward good business that’s good for all of us.

But is it good enough?  Does being a B-Corp somehow signify that we’re doing what we need to do? No way – we’re babes in the woods when it comes to that.  Not until we can say we’re a zero fossil fuel company (2015? 2020?) and a zero-waste company (2020?  2040?).  Not until everything that we do is generative and restorative.  But what the B-Corp system does is to give us a means of measuring progress, year after year, as we slog through the weeds of our constant desire to improve.