I traveled to Winchester Virginia last month.   I wasn’t there to campaign (although I should have been) but to give a talk and do a workshop for a conference produced by a branch of the Virginia Small Business Development Center.  It was different to be in a swing state just before this election – signs were everywhere and people were talking (but not really so different, because nobody seemed to be listening much!).

Winchester is the oldest city west of the Blue Ridge Mountains, founded in 1750.  It’s a small, historic town of 30,000.  My hosts put me up at an old downtown hotel called the George Washington.  I arrived late afternoon, checked in, and went to the bar for a drink.  I immediately met a 68 year old man born and raised in Winchester, and within half an hour he’d heaped on me much of the history of the town and the region.

Later I went to dinner with the conference organizers and a few local businesspeople at an Italian family restaurant called Violinos.  My dinner companions gave me all the “new” history of Winchester.  Between the bar and dinner I felt like I knew the place and I had only been in town a few hours.  Before we left the restaurant Andy Gyurisin, the organizer of the conference, gave me a book called Deer Hunting with Jesus, by Joe Bageant. 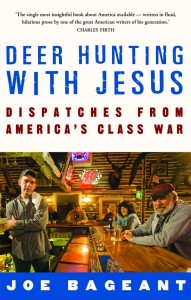 In bed I read the introduction to the book.  Bageant is (was – he died this year at the age of 64) an author and journalist with a Hunter Thompson-like wit and style.  Born and raised dirt-poor in Winchester, he left town young to enter the armed forces, headed west in the late sixties after serving his time, and then cobbled together the semblance of a middle class life as a writer for the next 30 years.  In 2000 he returned to Winchester to explore his roots and wrote this spellbinding no-hold-barred mix of stories and politics.  Howard Zinn, author of A People’s History of the United States and one of my long-time heroes, says, “Joe Bageant is a brilliant writer. He evokes working class America like no one else. The account of his revisit to his Virginia roots is sobering, poignant, and instructive.”

It’s true.  I’ve never read anything quite like this, except perhaps in Thomas Frank’s book What’s the Matter with Kansas?, but Bageant is closer to the subject, inside it, up close and personal, due to his background.  He paints a grim picture of a hard-bitten, downtrodden permanent redneck underclass that has been fully marginalized by our society and has now turned to Jesus and the Tea Party for solace.  Says Bageant in a more recent book, Rainbow Pie, A Redneck Memoir, “Economic, political, and social culture in America is staggering under the sheer weight of its white underclass, which now numbers some sixty million.  Generally unable to read at a functional level, they are easily manipulated by corporate-political interests to vote against advances in health and education, and even more easily mustered in support of any proposed military conflict, aggressive or otherwise. . .  Low skilled, and with little understanding of the world beyond what is presented to them by kitschy and simplistic television, movie, and other entertainments, or their experience as armed grunts in foreign combat, the future of the white underclass not only looks grim, but permanent.”

A large portion of these people, his people,  will vote Republican, although it’s almost suicidal for them to do so.  Their votes, if successful, assure that they will stay stuck where they are – and these are, of course, people with big hearts and lots of soul, no matter how much I may disagree with them.

Although I haven’t read anything like this, I’ve experienced something similar.  Forty-some years ago, as wandering hippies, we ended up in places like Selma, Oregon, places that thrived on logging for generations but were all logged out.  The logging companies had picked up and left, leaving these rural areas economically decimated.  At first we were treated like aliens by the locals.  But once they found out how interested we were in their nearly-forgotten skills and old ways, which they now had to press into service to survive, and they saw that we had even less money than they did, they warmed, and we learned a lot about the human spirit.

But back to Winchester.  I guess I hadn’t realized how Southern this area really is.  “Uh oh,” I thought, as I read Bageant’s intro.  “I’ve been entrusted with delivering a keynote address in the morning, to set the tone for the conference, and what I have to say in this talk, entitled ‘Sharing Ownership of the Future’ may be a bit too edgy and provocative for this audience.”

Should I soften the tone?  Change direction?  “What the hell,” I decided, “it’s too late for that.  I’ll just give it a whirl and see what happens.”  But I was nervous.

The conference was held at a local community college.  When I arrived it seemed lively and well organized.  There were about 150 people.  A local architect introduced me and I held forth.  An hour later I still held their attention, it seemed, and nobody had walked out as I closed by saying: “I have a favorite Chinese saying:  ‘Man stands for long time with mouth open before roast duck flies in.’  We need to be the ones roasting the duck. We need to decide to share ownership of the future and clear a path forward that is just, humane, and prosperous.”

Nobody threw anything.  They put their hands together and clapped.  There were even some whistles (or I might have made that up).

After the talk I led a workshop.  There were about 40 people packed into a small room.  I said, “Okay, I had my say, I have nothing prepared, this time is all yours.  So go ahead and take two minutes to think about your greatest challenge in your business life and your greatest aspiration for your business and work.  Then we’ll put some topics gleaned from your responses up on this flip chart here and dig into those that seem most compelling to all of you.”

For the next two minutes I watched the people in the silent room.  They were deep in thought or scribbling furiously.  I called for hands.  About a dozen immediately shot up.   We put a number of topics on the board and in the hour and a half allotted made our way through no more than half of them.

These people wanted to talk.  They wanted to think together.  Their minds were open.  Downtrodden they were not.  They were full of life.  My fears were unnecessary.  Even in Winchester Virginia there’s plenty of hope.

I hope there’s enough hope nationwide to keep Republicans out of the oval office and reduce the number that find their way into the halls of congress.   I’m nervous about that too.