I’ve been neglecting to write.  Time to get back to it.

Lying in mine I read a provocative new book about our future — The Great Disruption by Paul Gilding, an Australian who is the former head of Greenpeace International and more recently sustainability advisor to corporations and NGOs.  He is now on the faculty at Cambridge University’s Program for Sustainable Leadership.  As I read this book I came to see it as the most accessible and full-bodied treatment to date of the effects of climate change on our planet, our economies, our lives. 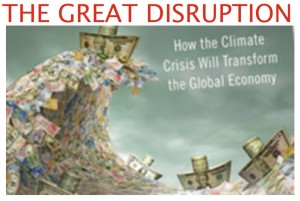 Soon after I encountered a review of the book by Nick Moraitis, another Australian, and one of the young founders of Make Believe, a consulting firm committed to social change.  But it wasn’t just a review; it was a plan.   Says Moraitis about his reaction to the book:

I couldn’t rationally put the book down and exclaim, ‘I agree, there is a more than even odds chance Paul is spot on,’—and then go back to my personal ‘business as usual.’  This is the type of mind-bending book that demands a personal response, and an action plan.

So he made one.  His plan covers the areas of Personal Finances, Current Work, Education, Promoting the Book, Business Opportunities, and Life.

I liked that—Read a Book and Make a Plan.  There is no reason not to prepare our companies, our communities, and our lives  – right now!  So I appropriated his idea and made one too.  I’ve kind of been working on this plan for a long time, in a variety of ways, but I’ve been lackadaisical at best; I know for certain that there are many who have been working on their versions far more intently—and coherently—than I.  So anyway, now I’m working on my own Personal (Slow) Action Plan in response to the new reality of life on planet earth and the New Economy it presupposes.  My approach is closely aligned with Moraitis’ model, but the categories that work for me are:

In a future post I’ll share the plan, and talk some about how the book affected the thinking of my colleagues here at SMCo, and how it is influencing our thinking about the future of our company.

But back to summer.  As you can imagine, just about everyone comes to Martha’s Vineyard at some time or another.  That can be a good thing.

In late July MA Governor Deval Patrick came to Eliakim’s Way, the West Tisbury zero energy affordable housing we developed, for a “summer conversation” with the Martha’s Vineyard citizens and public officials. It was a very nice scene with the Guv – people standing and sitting around under the trees in a clump (probably 60-80 people), Deval right out front, no separation from the crowd, wearing a Hawaiian shirt & sandals, no microphone. 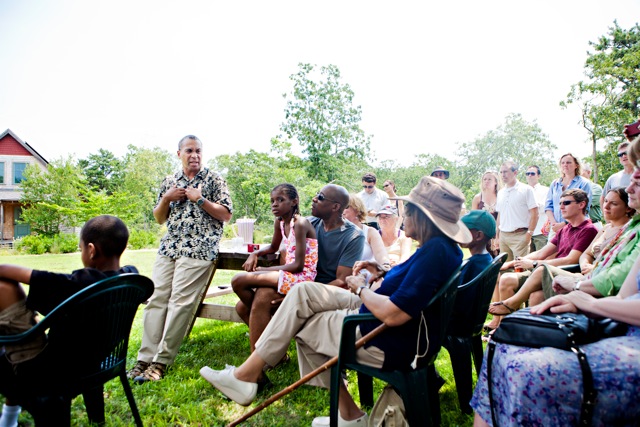 He spoke for no more than 5 minutes and then opened it up: “this a conversation, it’s all about you and your issues.”  He had several department heads with him to answer questions in more depth, and roving guys with notepads to take down peoples’ names if there wasn’t time for complete answers.

So what’s your solution to this issue?

He took plenty of comments and questions and was very loose and relaxed in his responses.  When he didn’t know much about the particular issue  he would either ask for more elaboration or turn to one of his staff.  He had a nice way of saying to the questioner, “So what’s your solution to this issue?”  Some good ideas emerged and provoked further discussion.

Nearing the end thunder started rolling and the sky darkened.  I had my 90 year old parents there sitting in beach chairs and it became clear that there was going to be a serious thunderstorm.  But I couldn’t leave because I had promised my colleague Rob Meyers (who couldn’t be there) that I would inquire about several solar issues.  I figured if I didn’t manage to get it done he would probably resign in disgust, so i stuck it out (we need him).  As the storm threatened to burst, I was next in the question queue and the person before me was verbose.  So I told my folks to head for the car (they move very slowly) and I waited my turn.

I said that one of the reasons the people at Eliakim’s are able to enjoy these zero energy homes is because of a tremendous state program called the Green Affordable Homes Initiative, and thanked him for that (and said it was a shame it was a one-shot deal, and hopefully they’ll get it going again).  I said the solar industry is booming in MA due to very progressive state policies and incentives, and thanked him for that.  “But,”  I said, “there are several potentially crippling obstacles that need immediate change.  One is the state Fire Marshal’s ruling that only licensed electricians can install solar systems. This makes no sense.  Electricians don’t build buildings or bridges, they don’t install signs and billboards, they just do the electrical part.  This ruling has the potential to cut out the people who built the industry and decrease quality to boot.”

He was nodding all along, and was obviously familiar with the issue.  “I got it. I got it.  I’m with you,”  he said.

“The other,”  I continued, “is the net metering cap [which regulates the amount of distributed renewable energy the utilities must accept and credit at retail prices].   It needs to be raised.”

“Yeah.  I got you. I got you.”  (he was becoming semi-exasperated). “Does everyone understand what these issues are?”  And he briefly explained.  And did it well.

Then the heavens let loose.  A mighty downpour.  Got my folks to the car and gone. . . .

It was good.  He is clearly in the loop and committed to positive change.  My follow up with his staff proved this to be true, and there is good movement happening in state government with both the issues I raised (and I’m happy to report that there already was before I raised them).

A few days later it was August.  I’ll talk about that in the next post.  Soon.  That’s a promise (you might think it’s a threat!).