This was published as an op-ed today in the Vineyard Gazette.

Solar panels, on the other hand, are considered to be quite benign.  The Nantucket Historic District Commission doesn’t like them much, and some people would rather see roofs without them, but by and large they have come to be widely accepted.

But what about when we scale them up with considerably larger installations that can make a meaningful contribution to our energy supply?  Are they really so benign?

There is an emerging consensus that solar electricity has significant potential on Martha’s Vineyard.  Homeowners are leading the way (taking advantage of the unusual current convergence of low prices and high incentives) but new initiatives are underway.  Recently we completed the largest renewable energy installation on the Vineyard – the 92 kilowatt photovoltaic (PV) solar electric system at Grey Barn, a new dairy farm in Chilmark.  It’s the largest now, but won’t be for long.

Vineyard Power, the Cape & Vineyard Electric Cooperative, the airport, several of the towns – all are considering large-scale solar systems.

But where will we put them?  We can’t put them in the ocean; they must be on land.

The most common place to locate small-scale solar PV installations is on the roof of the establishment that needs the electricity.  Sometimes this is feasible; sometimes it’s not (roofs face wrong way, shading, not enough roof, etc.)  The most common place to locate large-scale PV installations is also on roofs, but large roofs are limited on the Vineyard.

The best place for large scale PV installations is land that is not useful for anything else, and has a previously developed utility infrastructure.  Our capped landfills, for example, are perfect locations.  Tisbury has plans to put a one megawatt system at their landfill, almost 12 times the size of the Grey Barn system.  The other landfills present additional opportunities.

But we’ll need more space than that.  Where else?  I’d hate to see them covering good agricultural land (although PVs and sheep can mix) or disrupting habitat on other open land. 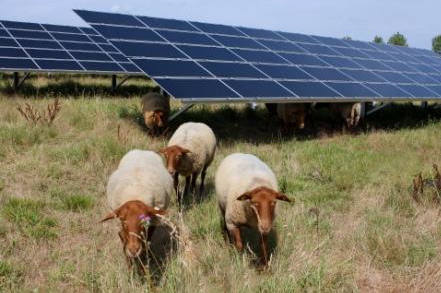 Already there has been discussion of the town of Edgartown using prime agricultural land for an installation.

Well then, what about parking lots?

Parking lots consist of land that has already been used up – it no longer has either agricultural or habitat potential.  Most have utility infrastructure nearby.  There are many systems for erecting PV shelters on parking lots.  Parking lot canopies are more expensive than typical ground mount systems, but the real estate is free, and it brings additional benefits to the owners of the real estate.

And benefits to those of us who use the parking lots.  Instead of the sun baking your car to 110 degrees while it’s parked at Cronigs Market, the roof above could be making electricity while your car stays cool – made in the shade. 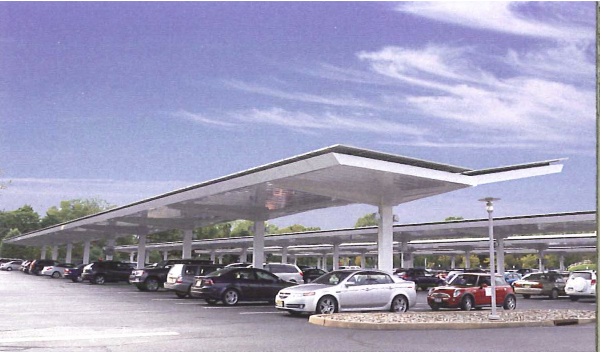 Awhile back my colleagues and I took a cursory look at the potential of 13 large parking lots on the Vineyard (schools, the Steamship Authority, supermarkets, hospital, Park ‘n Ride, etc.) and found that they could host about 5.5 Megawatts of PV (enough to provide the electricity for more than 900 average Massachusetts houses).  There are many more parking lots than the few we looked at.

All told, there may be enough space to locate 12-15 megawatts of large-scale solar electricity on landfills and parking lots without intruding on agricultural lands or habitat.

Then there are the rooftops.  We have roughly 18,000 existing buildings.  Let’s imagine that one third of our existing buildings are suitable for rooftop solar and we could fit an average of 4 kilowatts of capacity on each.  That’s another 24 megawatts.  Combining the rooftops with the landfills and the parking lots we begin to achieve significant numbers – approximately 20% of our current MV electricity use (and perhaps an even larger percentage if our energy conservation and efficiency efforts – the foundations of a secure, low-carbon energy future – are aggressive and rigorous).

Vineyard Power proposes to provide a large fraction of the Vineyard’s electricity needs using offshore wind.  This is likely to be the core power-producing component of a sustainable energy future for the Vineyard.  But wind speeds are highest in the winter and island electrical demand is highest in the summer.  Therefore committing to as much solar electric as possible, which produces more in the sunny summer months, will help to complement offshore wind and balance our demands with our production capability.

We’re hoping to do a demonstration parking lot canopy project within the next year or so, possibly at the Martha’s Vineyard Regional High School.  It’s exciting to think about.  It will be even more exciting to see them spread across the Vineyard one by one.  As we continue to utilize our solar resource in ever-expanding ways, let’s be certain to put those panels where they’ll do the most good and the least harm. 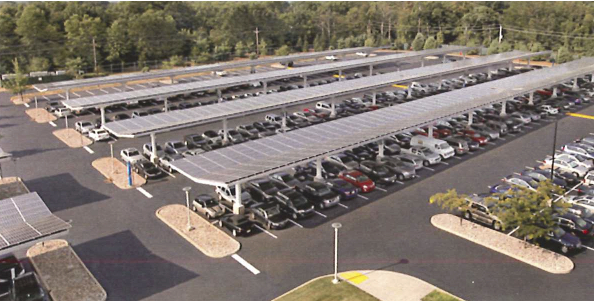