While the eyes of the world focus on Copenhagen, here at home on Martha’s Vineyard wind energy has been receiving a mighty dose of attention – more than ever before.  Are we making progress?  Maybe some. You be the judge.

Wind has been in the local news in four distinctly different regards at once:  the release and reaction to the draft Massachusetts Oceans Management Plan, the public coming-out of a new organization called Vineyard Power, the continuing saga of Cape Wind, and the adoption of a new wind by-law in Aquinnah.

According to Lester Brown, the president of Earth Policy Institute and the author of Plan B 4.0, 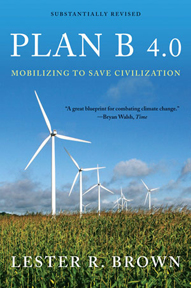 the National Renewable Energy Lab (NREL) has identified 1000 gigawatts of potential offshore wind energy on the U.S. East Coast.  That’s an extraordinary number.  A gigawatt is 1000 megawatts.  The size of the proposed Cape Wind project is 420 Megawatts.  That means NREL has identified the potential for 2500 Cape Winds on the East Coast.  That’s right – two thousand five hundred.  Coupled with similar West Coast potential, there is offshore capacity sufficient to power the entire U.S. economy.

How much offshore capacity does the U.S have at present?

Not so in Europe and Asia.  Wind energy is growing, worldwide, at a furious rate.  Last month, according to “Progressive Investor” ,  “Spain supplied 53% of its electricity from wind” with more than 10 GW (24 Cape Winds) installed.  They are expecting another 5.3 GW (12 more Cape Winds) online by 2012.  That’s just Spain, with a coastline roughly one quarter of the length of the U.S. coastline.  Will we even have our modest first effort –  Cape Wind – installed by 2012??

The U.S. is now a full decade behind the rest of the developed world in the transition to renewable energy and the battle to tame climate change.  We’re discovering the shame of following for the first time ever.  As David Orr says in his new book Down to the Wire “The global crisis ahead is a direct result of the largest political failure in history.”  We have been at the forefront of that failure.

Here in Massachusetts, however,  the political commitment to change is strong.  The Deval Patrick administration has been stellar, demonstrating serious leadership and investing heavily in diverse renewable energy initiatives.

Several months ago the Patrick administration released their draft Oceans Management Plan for Massachusetts waters. Although pleased by this pro-active planning, I was disappointed to see that the competing matrix of uses left very little area available for offshore wind development.  The only areas identified as suitable are near the Vineyard and the adjacent island of Cuttyhunk.  I assume there must be others.

But that was not the primary concern for most Vineyarders.  The designation of our waters drew a swift and negative reaction from local community and political leaders,  and a demand for local control.  Some accommodation has been reached, but at this point, it seems that the state government’s resolve remains firm.  They may add to the area (that’s good!) and they may award a stronger voice and greater community benefits to the Vineyard (that’s good!) but they will not let NIMBYism rule the day (that’s good too!).

A group called Let Vineyarders Decide formed to demand alterations to the state plan.  Meanwhile, the real good news is that during the last two years a new organization called Vineyard Power

has been in the design and formative stages and has now completed a business plan and formal incorporation.  This is a citizen-owned cooperative that will “secure our energy future and keep control in our community.”  Electricity will be generated from offshore wind turbines and distributed to co-op members through the existing grid. Go here to join now.

When it comes to wind turbines, location always seems to be the rub. The current debate, it seems to me, is missing the point.  Sometimes, when we’re busy formulating an answer, we fail to identify the right question.  For years people have been debating the location of Cape Wind – is this the right place for it or should it be at Otis Air Force base, or someplace else?  Now we’ve got the same thing going on with the Oceans’ Management Plan.  Right place or wrong place?

We need to stop running around in circles, get off the dime, and move forward.I think we will.  Initial perceptions can change dramatically, as they have in so many places.

Years ago, after the first large wind turbine in Massachusetts was installed in the town of Hull, 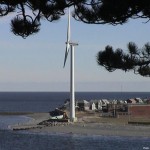 I drove along Nantasket Beach and through town with my daughter and a friend.  Suddenly the immense wind machine, owned by the local municipal utility, came into view.  My daughter Sophie gasped:  “It’s huge.  Scary.”  We parked in the parking lot just steps from the machine and walked to it. The tower is 165’ high and the blades extend 75’ above that. It is almost noiseless – it makes a gentle whooshing sound. As we walked away we turned and stared back at it.  Sophie said, “It’s quite beautiful, isn’t it?  Especially because of what it does.”

That’s my girl.  Perceptions can change in a heartbeat.

The Hull machine, right on the beach, adjacent to the high school and a residential neighborhood, and in plain view of downtown Boston, was so successful that the town wanted to do another – three times the size.  They polled the residents who live in the shadow of the beast.  Of the five hundred respondents, 480 supported more turbines.  That’s 96 percent.  You tell me: when are 96% of people positive about anything?

This degree of support is a common reaction, world wide, in areas that are making the commitment to large-scale wind energy. Not before development, when many are scared, but after development, when consciousness seems to shift.

Remarkably, the citizens of our small sister island Cuttyhunk, whose waters the draft Oceans Management Plan also designated for wind development, are pre-development supporters.  Yes, in my backyard, the citizens say! 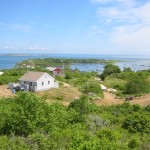 They are attracted to the economic benefits, but they also say that they would favor wind development even if there were no potential financial benefits, because “we all have to do our part”.  Because if they’re not in our backyard they’re in someone else’s.  I expect this attitude to become pervasive in the years to come – a collective un-tethering from the urge to reactively say no to change.

Because as some do battle with large-scale turbine development, many others are battling, as author Bill McKibben says, “to see them not as industrial eyesores, but as part of a new aesthetic.  The wind made visible.  The slow, steady turning that blows us into a future less hopeless than the future we’re steaming toward now.”

I’m glad for all the discussion, for the intensity of feeling, and for the widespread community involvement.  While I may not agree with all that’s being said, it’s essential that everyone is heard.  I hope that ultimately we’ll realize that we, as stewards of an area with an inexhaustible resource, have an obligation to find comfort with its use.