My friend David Smathers of the TeamWorks Cooperative Network in California writes:

“The Mondragon cooperatives and the United Steelworkers have announced an historic partnership through which they will buy or start manufacturing businesses in the U.S. and Canada that will combine Mondragon’s democratic structure of ownership and governance with collective bargaining.

It will take many years to implement.  But particularly in the face of the economic crisis that has exposed Wall Street’s failure to provide responsible stewardship of the economy, this is a very heartening development.  Together, these two institutions have the resources, technical expertise, and vision to demonstrate to the public that it is possible to structure and run large corporations in entirely different ways than what we have become accustomed to.”

The Mondragon Cooperative Corporation (MCC) is the world’s longest-running, highest-grossing, most successful experiment in workplace democracy.  Now 53 years old, the Basque association of worker cooperatives consists of roughly 260 cooperative enterprises with more than 100,000 employee owners.It is the seventh largest corporation in Spain and the world’s largest industrial workers’ cooperative.  Its enterprises include its own university, research center, and bank.

In January 2001 I visited Mondragon with a small group of Americans for a four-day examination of the culture of both the town and the MCC. Having used a version of the Mondragon principles as the basis for the restructuring of South Mountain Company fourteen years before that, it was thrilling to get a firsthand look at this system of worker-owned cooperatives that appears to be unparalleled in its dynamism and its impact on a region.

Mondragon has created a total system wherein people can learn, work, shop, and live within a cooperative environment. The town, in its isolated valley, has a vital, prosperous feel—a small bustling city with a comfortable mix of young people from the university, new middle-class families, and those who have been in the valley for generations. The surrounding hills are verdant and productive, dotted with villages and farms. The MCC’s influence reaches into every aspect of community life.

I’ve always wondered why the amazing story of Mondragon is such a secret in the United States.  It has attracted significant attention worldwide, but far less here. Even the U.S. based socially responsible business movement pays it little mind (as it does the issue of ownership in general).  Is the idea that capital is a tool, rather than the residence of power, too radical to embrace?  Instead of awarding profit and control to capital, Mondragon has succeeded by awarding profit and control to labor in a system of democratic capitalism.  It has developed an enduring way to use capital productively and distribute income equitably at the same time.

For too long the idea of worker-cooperatives as a potent business model has flown under the radar, but in Michael Moore’s new film:  Capitalism: A Love Story (marquee photo)  people all over the country have been seeing worker cooperatives and workplace democracy in action. 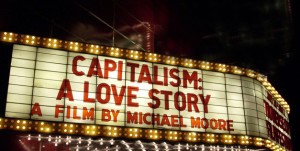 He presents them as a possible solution to the undemocratic, inequitable and greed-driven economy that he spends most of the film building a case against.

Featured on film are Alvarado Street Bakery in Rohnert Park, California, and Isthmus Engineering in Madison, Wisconsin.  Scenes of workers making decisions, working on production lines, and eating and laughing together paint a picture of worker cooperatives that stands in marked contrast to the exploitation and abandonment shown in other parts of the film.

The new Mondragon/Steelworkers association will further raise the profile of cooperative business in the U.S.   More importantly, it may jump start the crucial re-industrialization of the nation that is so essential to our future.

In the Steelworkers announcement of the agreement USW president Leo Gerard says, “We see Mondragon’s cooperative model with ‘one worker, one vote’ ownership as a means to re-empower workers and make business accountable to Main Street instead of Wall Street.”

I’m excited by the prospect of seeing where this will lead.