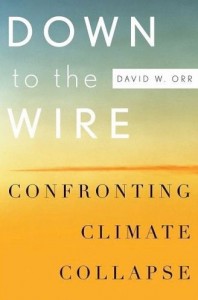 Awhile ago I gave up on doom and gloom.  I’ve learned enough to know the problems, and I tired of reading 250 pages of meticulously researched how-bad-it-is-and-how-bad-it’s-gonna-get followed by 25 pages of generalities about the solutions.  But I broke my rule when I saw David Orr’s new book, Down to the Wire.  The subtitle is Confronting Climate Collapse.  He does just that.

He says that  “The global crisis ahead is a direct result of the largest political failure in history.”

Orr, a professor of environmental studies and politics at Oberlin, goes on to say that “No national leader has yet done what Lincoln did for slavery and placed the issue of sustainability in its larger moral context, . . . and cast it as the linchpin that connects all other issues. Adoption of a robust energy policy is the fastest and cheapest way to improve the economy, environment, health, and equity, and increase security.  It is the keystone issue, not just another stone in the arch.”

The book is stark, blunt, and powerful.

“None of us,” says Orr, “asked for these challenges.  But it has been given to us to lay the foundation for a durable and just global civilization, to secure the gift of life and pass it on undiminished to unnumbered generations, No previous generation could have said that, and none had greater work to do.”

In his view, it’s all about politics.

And he’s hard on pathological optimists like me.  When I was done I needed a lift.

I thought maybe I would find it in Stewart Brand’s new book, Whole Earth Discipline:  An Ecopragmatist Manifesto.

In 1969 Stewart Brand released The Whole Earth Catalog, a “book” that probably had as much influence on my life as any other.  On the frontispiece of the original classic there is a statement of purpose that begins with the now-famous sentence, “We are as gods and might as well get good at it.” Whole Earth Discipline begins with this, “We are as gods and HAVE to get good at it.”  That sums up what’s happened during the 40 year interval. 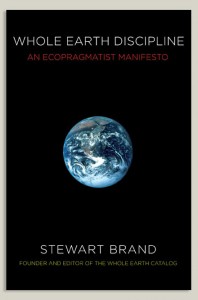 In this book Stewart closes the loop. In his inimitable way (expository writing doesn’t really get any better than his, in my view) and with the same deeply thoughtful, fearless, always-wry, story-filled and at-the-same-time analytically and argumentatively complex way that he has for four decades, Stewart shakes it up again.

He comes at the issue very differently from Orr.  In Brand’s view it’s all about science and technology.  But the two books share a fundamental underlying principle:  There’s no time to lose and the work ahead is daunting.

But this all goes back a long way, too.  In his classic 1973 economics text, Small is Beautiful, Britain’s EF Schumacher’s argued that a linked system of small-scale local economies would be more effective, resilient, and people-centered than a large multi-national economy.

In the Next Whole Earth Catalog, published in 1980, Stewart Brand said about Schumacher’s book, “Few books have exerted such leverage on an Age as this one . . The wonder of Schumacher’s work is his eminent practicality. . .  with good sense and a mature spirituality [he] comes on like John Henry against the mega-machine, sure that he will win. . .”

Now Brand is promoting the mega-machine.  But Schumacher himself, according to Susan Witt of the Schumacher Institute, said that if everyone were for small, he’d be for big, and it wasn’t just being contrarian. “It was a question of balance,” she says.  “Even in the 1960’s and 70’s when he was writing and speaking, he understood that the balance was tipping too much toward large scale economic institutions and there needed to be a correction towards the local and regional.”

Orr argues for the same, but also for massive international political change.  Brand does too, but he believes that “at this whiplash moment” we need more than political change and re-localization.  “If the transition to a less livable Earth is already under way, we’re ants on a burning log.  We can rush around all we want; there’s nothing in our ant repertoire that can fix the problem.”

Brand adds four elements to the usual environmental repertoire:  embracing urbanization and greening the cities (where, he says, 80% of the world’s population will live by mid-century), stepping up the use of next-generation nuclear power, bio-engineering to feed a changing world, and geoengineering, if necessary, to “change the climate back.”  It’s bold, it’s futuristic, it’s risky, the last three are anathema to many environmentalists, and it’s Brand, through and through.

Underpinning both books is the understanding that the key to our future is the rapid phase-out of coal.  Even environmental activist Bill McKibben makes the point, in Stewart’s book,  that  “Nuclear power is a potential safety threat, if something goes wrong.  Coal-fired power is guaranteed destruction, filling the atmosphere with planet-heating carbon when it operates the way it’s supposed to” [my underlining].

One thing Brand is not concerned about is over-population – he demonstrates clearly that we are headed toward planetary population stabilization (and probably reduction).  It’s those of us already here that he worries about.  “Five out of six people live in the developing world – about 5.7 billion in 2010.  One way or another, the world’s poor will get grid electricity.  Where that electricity comes from will determine what happens with the climate.”

Throughout his career, Brand has been a prognosticator – his predictions are legendary.  Some of them, as he is quick to relate, have been way off the mark.  Some, however, have not.  He says now that  “The shift from dread to action is under way.  The outcome is wholly uncertain.”

At the end,  he summarizes the book with a few pithy sentences:  “Ecological balance is too important for sentiment.  It requires science.”

“The health of natural infrastructure is too compromised for passivity.  It requires engineering.”

“What we call natural and what we call human are inseparable.  We live one life.”

And it’s one world.  Tomorrow is the big day of the worldwide demonstration to cut global carbon dioxide levels to 350 parts per million, the upper limit of safety.

McKibben, the chief organizer, says that the 4000 demonstrations and gatherings that take place in 170 countries will be the most widespread day of political action the world has ever seen.   I’m sure Orr will be there,  in his town, and Brand in his.

I’ll be over at the East Chop Light in Oak Bluffs.  See you there. 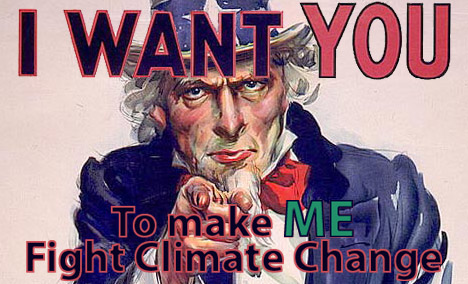