I have about half a dozen posts half done and about half as much time as I wish, so for the moment I’m just going to tell a short story paraphrased from Tim Brown’s new book Design Thinking. But coming soon there will be more about that book (and IDEO, the amazing company of which Brown is the CEO), a piece about pirates (as democratic role models!!),  a review of two remarkable new books about our future (one by Stewart Brand and one by David Orr), a discussion of how little I understand about the economy (after reading The New Yorker’s ” Money Issue”)  and more. . .

In 2005 the Japanese Ministry of the Environment approached an advertising agency called Hakuhodo. They wanted help getting the Japanese people involved in meeting Japan’s Kyoto commitment. Hakuhodo suggested creating a campaign to mobilize the collectivist ethos of Japanese society toward the goal of reducing emissions 6 percent.

They called the campaign Cool Biz. Within one year a staggering 95.8% of the Japanese population recognized the slogan. 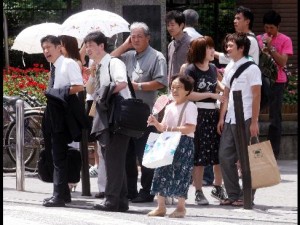 It was about air conditioning. Generally the setpoint was 79 degrees F so businessmen in suits and ties could work comfortably in their offices in the hot summer. The Cool Biz program recommended that everyone wear casual clothing June 1 to October 1 so the setpoint could be raised to 82 degrees F. Huge energy savings, but how could they overcome deeply ingrained cultural practice in this traditional and hierarchical society?

Rather than an advertising campaign, the Hakhoto team set up a Cool Biz fashion show at the 2005 World Exposition in Aichi. Dozens of CEOs strutted around wearing casual lightweight clothes with open necks. Even the Prime Minister was featured in newspaper and TV stories tieless and wearing a short-sleeved shirt.

The event caused a sensation. The message was clear: it’s okay to depart from convention to protect the environment. Within 3 years 25,000 businesses signed on and millions of individuals made commitments on the Cool Biz website. The program saved over 1 million tons of carbon emissions in 2006, and it has spread to China, Korea, and other parts of Asia.

It’s the power of effective storytelling coupled with imaginative leadership.

The people are probably happier too, don’t you think?  Pretty soon they’ll all be going barefoot.