A group of friends was here for a post-Labor Day vacation, enjoying the last harmonies of Vineyard summer – warm water, cool breezes, and empty roads.  Devon Hartman runs a design/build company in L.A. and Jamie Wolfe is a design/builder from Connecticut.  Dennis Allen runs a building company in Santa Barbara, CA.  Sal Alfano is the editor of both the Journal of Light Construction and Remodeling Magazine.  Each is remarkable in his own way.  Each has much to teach.  All agreed to do a panel discussion for an SMCo company meeting.

The following questions were put to the four of them:  what happened to your business (and you) between last September and this September, what lasting effects has the economic crisis had, and what’s next for you and your enterprise?

They spoke about the troubles of these times, but they also spoke – compellingly – about the possibilities, and new doors that are opening.

Jamie, whose business had severely tanked, talked about the opening that has come with the lack of work – a rare opportunity to “re-boot” his business from Powered Down to Re-New. Dennis spoke of the perfect occasion for providing greater service and paying closer attention to clients, and told about the risks they have taken, like promoting two young employees to positions of General Manager and (I think) Production Coordinator, guys who, Dennis said “think a lot faster than I do.” Devon talked about the utter necessity of relentless, effective, and widespread communication within his market area, and the need to expand the breadth of both terrain and service.  He pointed out that you never know how little people know about what you do and what your capabilities are. Just recently his own brother asked him to recommend someone who could help him figure out how to reduce energy use (a new specialty of his own company!).  And when he ran into a client in the supermarket who he hadn’t seen in 25 years she said, ” So. . .  how’s the painting business going?”  They haven’t been a painting company for a quarter century. And Sal, with the great overview that his position in the industry affords him, said that nobody is immune to these times.  Everyone is affected.  He said we’re thinking less about what we’d like to do and more about what we have to do.  It’s a mold-shattering time.

We have had many company meetings with a variety of stimulating people, topics and exchanges, but this one seemed to touch more people, in more ways, than usual. I think it’s because all four were speaking, from the heart, about making the most of hard times and holding true to our values at the same time. 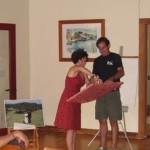 It was also a moment for all of us to toast and celebrate the recent marriage of one of my partners, COO Deirdre Bohan, with Deirdre and her new husband Dave.

While they were here I happened to be in the middle of an extraordinary book called Born to Run, by Christopher McDougall.  It’s an epic adventure about the reclusive Tarahumara Indians who live deep in the Copper Canyons (a canyon system larger than, and in some places deeper than, the Grand Canyon) in the Sierra Madre Mountains of Mexico.  The Tarahumaras may be the greatest runners on the planet, but they’re far more than that.   And no, the book isn’t really about them either, it’s about human endeavor and community and evolution and it is full of more great stories than I’ve come across in any one place in a long time.  I don’t even like to run and I couldn’t put it down.

McDougall tells the story of a Czech runner named Emil Zatopek who set world’s records and won gold medals in two events in the 1952 Helsinki Olympics, and then decided to run in the Olympic Marathon.  He’d never run a marathon, but he won that too, and set a new world record in that event as well!!  He ran with “infectious joy”, and he was beloved – even his opponents loved to see him win.  Says McDougall, “You can’t pay someone to run with such infectious joy.

You can’t bully them into it, either, which Zatopek would unfortunately have to prove.  When the Red Army marched into Prague in 1968 to crush the pro-democracy movement, Zatopek was given a choice: he could get on board with the Soviets and become a sports ambassador, or he could spend the rest of his life cleaning toilets in a uranium mine.”  He took the toilets.  And disappeared.

At the same time Ron Clarke, an Australian, broke Zatopek’s records but never managed to win the big one.  He had become known as “the bloke who choked”.  In the summer of ’68 he blew his final chance in the Mexico City Olympics.  On the way home he stopped in Prague to pay a courtesy call to the “bloke who never lost”.   During the visit, he noticed Zatopek slipping something into his suitcase; assuming he was smuggling some message to the world, he didn’t dare open it until he was long gone.

It was Zatopek’s 1952 Olympic 10,000 meter gold metal.  He thought Clarke was the one who deserved it.  For Zatopek to give the medal to the man who had replaced his name in the record books at precisely the moment when he was losing everything else was, as McDougall said, “an act of almost unimaginable compassion.”

I don’t mean to over-dramatize, or to diminish the passionate adherence to deep values and unthinkable sacrifice of Zatopek, but the generous sharing of stories and personal truth by Jamie, Dennis, Devon and Sal seemed somehow related. Times of adversity are when our values are tested.  I once heard a visionary businessman named Paul Saginaw of Zingerman’s say, “Principles aren’t principles until they cost something.”  Simple as that.