After reading my last post, Values and Principles, Ross Chapin (www.rosschapin.com.) wrote to me.  Ross is an architect in the Northwest who has pioneered in the design and development of small “Pocket Neighborhoods” and is currently writing a book on the subject. 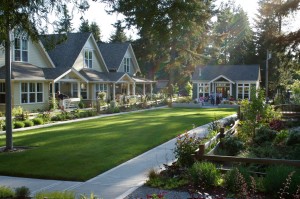 Ross wrote, “On my end, we’ve somehow managed to get to this day without laying off or furloughing anyone (gratefulness is a daily practice), though the inquiries for custom homes are pretty shy these days.  However, we are, and have been, getting calls from developers all over the country — as many as 4 a week … Mostly mainstream developers, who often say, “Thank goodness for this recession — it brought us to our senses!  We were focused on profit, but it was in no way sustainable or good for the community. Can you help us look at a better plan?”   … So we’re planning neighborhoods all over –  from clusters of 8 cottages, to mixed-use communities of 150 dwellings. Some infill, some brown and greenfield.   You may have heard of our work with Dan Gainsboro in Concord?  He’s working with us and your friend and colleague Marc Rosenbaum. We’re in the process of submitting a 12-house plan for a site in West Concord.  And work in and with our island community unfolds, perhaps similar to MV.  These hard times are good for thinking deeply about what’s most important.”

Isn’t that the truth?  And isn’t it heartening that mainstream developers are doing just that?

But what about our political leaders?    Shouldn’t these hard times be good for thinking deeply about what’s important for them too?   The health care battles rage on, economic reform is a distant dream, and climate change – the one that matters most – languishes.

According to the New York Times, (July 29, 2009), a study by the McKinsey consulting group says that a $520 billion investment in energy efficiency improvements to U.S. buildings over the next 10 years could save $1.2 trillion and cut total U.S. energy use by 23%, a reduction greater than the entire energy consumption of Canada.

That’s all well and good, but where does the money come from?

Denmark has a $5/gallon tax on gas and diesel and nobody’s suffering.  If we had just a $1 tax it would yield $140 billion/year.

But why stop there?  The more you tax the more you have – to reduce the deficit, pay for health care reform, and help low and middle income people pay for more expensive fuel (by cranking up energy efficiency and renewable energy incentives, expanding cash for clunkers, and doing a host of sensible things like that to reduce our oil addiction and create an economy that works). Nobody has to suffer.

If the recession can bring mainstream developers to their senses, maybe it can bring senators and representatives to their senses too.  If they were to start to think deeply about what’s most important they might find that it’s not a minefield; it’s a vast virgin forest of new possibilities.