One more post (which might become two) about employee ownership and workplace democracy before I veer off toward some related topics. . . .

Despite the Obama administration’s recent shift in emphasis from homeownership to rental housing (which I will discuss in detail in a future post), homeownership is at the very heart of the American dream. Owning our work, and finding meaning there, seems as essential to a good life as owning our homes. But although many of us own homes, far fewer own our work.

But the idea that the people who use our productive assets should own them is as old as America.  As John Logue of the Ohio Employee Ownership Center says in The Real World of Employee Ownership, “Thomas Jefferson argued passionately that what set this country apart from the Old World and made it so suitable for democracy was the fact that the ownership of productive property was widely dispersed:  farmers owned their land in the countryside; artisans owned their tools and shopkeepers their shops in the towns.”

Employee ownership is emerging from beneath the radar. There is an awakening interest in the potential of broadly shared ownership of enterprise. The idea is beginning to surface all over the world in companies small and large.  Today over 11,000 companies nationally, with over 13  million employees, have some form of employee ownership.  In fact, today more Americans work in firms partly or wholly owned by employees than are members of unions in the private sector. Most of these do not share the SMCo co-op model, and many can hardly be characterized as democratic, but all indicate that we may be learning something as we try to assemble the components of a restorative future.

The context is important. My fellow baby boomers own several million businesses, and during the next two decades, most of these founders will exit. The businesses will either be shut down, or sold to outsiders, or passed on. Selling to employees is an option that deserves to be more widely understood, for it offers powerful benefits to all parties. There is a need for more information as employee ownership becomes an important entity of choice, not only for aging boomers but for the millions of young people intent on finding real meaning in their work.  Employee ownership is one way to open that door. There is new knowledge and there are new practices that make employee ownership more widely applicable, and growing interest among these business owners.

Tom Greer is one of them.

Many people pass through Martha’s Vineyard  (how’s that for understatement?).  Some of them want to visit our facility, or see some of our work, or talk business. 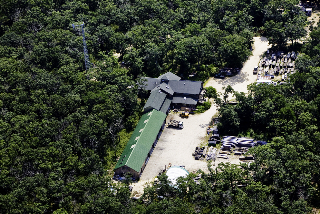 Each of these visits takes time, so we have to be careful.  It’s a delicate balance because, mostly, these are well-meaning people with good stories and legitimate interest.  How can you possibly turn them away, how can you possibly not generously accept?  Maybe someday we’ll have designated visiting days, but for now we field the e-mails and calls and decide whether time will allow and the inquiry is serious enough to warrant the time.

Tom Greer, a builder from Charlottesville, Virginia, was on the island.  He asked to visit, and and wanted to ask a few questions.  Turns out his successful, stable business 31 years old, has 25 employees and annual revenues of $8 million (about our size).  A decade ago he took two longtime colleagues in a partners; each owns 20% and Tom owns 60%.

He is interested in examining the possibility of becoming a co-op.  I asked him why, given the success story, he is interested in rocking this stable boat by considering a shift to co-operative ownership.  He responded, “As I have grown up with my people, I have wondered what it is like for them to give their working life to a company, and then upon retirement walk away from their life’s work with only Social Security. I have benefited greatly from their sweat, loved every minute of my ownership, and think that with the co-op concept I can help paint a better picture.”  As he digs deeper he’s beginning to understand the challenges.  Whether they ultimately make the shift or not, Tom Greer is the kind of person who will change the way we do business.

He knows that it’s about sharing ownership of the future.